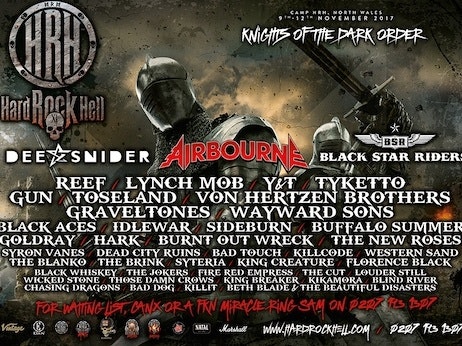 With more than 50 bands from around the globe descending on Wales for the10th anniversary, they are truly excited to stage the all famous HRH experience one more time.

As promised, they will be visiting all sides of the rock and metal spectrum as usual. Expect some particular focus on the old school classic rock n metal as well as the sleaze brigade as feature stages. Classic, legends n surprises et all... as per the norm.

Hailing from a tough Australian country town, these four boys have grown up with a healthy respect for the fine art that is foot to the floor rock n roll! Airbourne manage to call upon the spiritual substance of Thin Lizzy, the gritty pub-crawling vibe of Motörhead, the grandiose histrionic theatricality of Judas Priest, the unifying audience domination of Iron Maiden and the sharp bite of their fellow Australians in the legendary AC/DC.

Featuring Thin Lizzy alumni Ricky Warwick (vocals), Scott Gorham (guitar), Damon Johnson (guitar) and Robert Crane (bass), with new addition Chad Szeliga on drums (Breaking Benjamin, Black Label Society). Black Star Riders are the next step in the evolution of the Thin Lizzy story, with a sound that retains that classic feel but is very much its own as well.

West Country rockers fronted by Gary Stringer who first found fame in the mid '90s, thanks to their song 'Naked' being used in a Sony Minidisc commercial. Perhaps best known for their '96 top ten hit 'Place Your Hands', which was adopted by Chris Evans and is still played in indie and rock clubs across the country today, along with chart-topping second album 'Glow'.

Still rocking on with David Meniketti in front, Y&T are ready as ever to open fire on audiences all over the world with their contagious brand of heavy rock 'n' roll. Never down for the count for long, the group are reunited once more, and dedicated to bringing not just a set of golden oldies to their legions of adoring fans.

New York-based Tyketto are one of the best and most under-rated radio friendly hard rock bands, fronted by former Waysted vocalist Danny Vaughn.

A five piece rock band fronted by ex racing champion, James Toseland. He began his full-time music career by collaborating with Little Angels legend Toby Jepson to write an album packed with hard/classic rock and power ballads. He’s used the grit, determination and will to succeed that made him a double world superbike champion to focus on pursuing his first passion in life: music. Being invited to play Download festival as well as being the opening act for The Darkness and Little Angels provided an incredible kick start to the band's career.

They may sound like something from a dark fairytale, but the Von Hertzen Brothers are actually Finland's No. 1 rock band – three siblings (vocalist/guitarist Mikko, guitarist/ vocalist Kie & bassist/vocalist Jonne) with a formidable live reputation plus the collective ability to produce challenging music that never comes across as specialist or niche.

Hailing from South Wales, Buffalo Summer are an “effortlessly up beat; groove-laden; sing along balls out rock n roll band.”

Goldray is the new project of Kenwyn House (Reef), Leah Rasmussen, and Andy Treacy (Faithless) providing haunting, soulful vocals and killer guitar hooks, blending psych and prog experimental arrangements together. Combining the energy of Queens Of The Stone Age, The Doors and Led Zeppelin with emotive power of The Cocteau Twins and Bjork to PJ Harvey and Patti Smith.

A classic rock band from Northamptonshire.

Syron Vanes was formed 1980 in Malmoe in the south of Sweden. The core of the band was guitarist Anders Hahne and drummer Staffan Lindstedt. Together with early members Ola Pettersson on guitar and Anders Lind on bass they began their journey. 'Bringer Of Evil' was to become a great selling album reaching 100,000 sales and still selling today.

Four-piece classic/hard rock band. Their determination and passion for playing ballsy riff driven rock means that they give their audience the show they deserve.

Syteria are a female fronted rock band that was born in 2015 and although they rehearse in Leeds they live all over South Yorkshire, England. Syteria is Jackie (Guitar, Vocals), Julia (Vocals), Keira (Bass Guitar, Vocals) and Pablo (Drums, Vocals).

Florence Black are a rock trio from The Valleys who have been creating music together since their teens.

Emerging with an impressive arsenal of huge stoner rock riffs and soaring anthems, Fire Red Empress boast a thunderous hard rock sound that refuses to be ignored. "There is a rumbling this band are about to go stratospheric" (Global Onslaught Magazine) "A glorious head on collision of Queens of the Stone Age rock coupled with Muse-like vocal harmonies" (Planet Mosh)