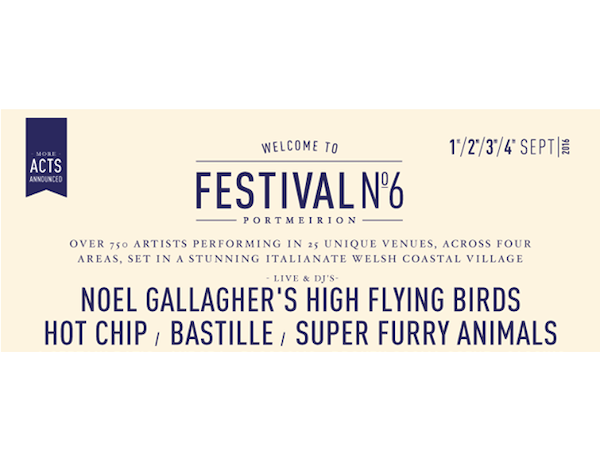 A bespoke banquet of music, arts and entertainment over the weekend of September 1st-4th in Portmeirion Wales; also known as the location of the cult TV series, 'The Prisoner'.

Hot Chip make a strangely quirky kind of electro-pop music fusing the sounds of Prince, Devo, the Beta Band and the Beach Boys. The GRAMMY andf Mercury nominated band hit their mainstream peak with the top 30 single 'Over And Over' and the top 10 hit 'Ready For The Floor', but their energetic live shows have continued to reach bigger audiences.

As Wales' favourite psychedelic popsters, the Super Furry Animals have inspired a whole generation of artists since their emergence in the mid-nineties. Recording in both English and Welsh, they changed the way that many thought about the language, whilst producing some of the finest summery Beach Boys-inspired indie to have surfaced in the last two decades.

Andrew Weatherall was a dance music legend, co-founder of Junior Boys Own with Terry Farley and a superb DJ who produced and remixed albums for artists such as Primal Scream, Beth Orton and One Dove, whilst also making experimental dance music under aliases including Meek and Planet 4 Folk. He was also one half of Two Lone Swordsmen. He passed away in February 2020 at the age of 56.

One of the co-owners of Hessle Audio and DJ.

Fabric's resident DJ and musical director for Saturday nights at the club.

Joe Duddell has always divided his time & passion equally between alternative and classical music. Shortly after his band Pullover caught the eye of label Fierce Panda, he went to study composition with Steve Martland - the only composer to be exclusively signed to Factory Records – at the Royal Academy of Music. After composing for, amongst others, Colin Currie through the '00s, Joe orchestrated and conducted the now legendary collaboration between Elbow and The Halle Orchestra in Manchester and has since released his first CD of chamber music.

Maverick cut and paste merchants with absolutely no respect for (copyright) law. Funny and wrong.

Joe Lycett (formerly Hugo Boss) is a hugely talented comedian with an unaffected, relaxed and effortless stage presence. An appealing, engaging and natural performer. His comedy career started off at Manchester University, winning the Chortle Student Comedy Award in 2009. 'Imaginative and cheekily subversive comedy... entertainingly mischievous... An intensely charming and talented young comic' (The Guardian) 'Joe Lycett is one of the strongest emerging comedy talents we've seen in a long time. This young man has a huge future' (Time Out) 'A delightfully natural style that builds a real connection with the audience... an accomplished storyteller... Finds brilliance in what could be merely workaday' (Chortle) 'Rising talent Joe Lycett already possesses the confidence and relaxed, homely charm of an old campaigner' (The Times). Joe Lycett was #7 in Ents24's Hardest Working Comedians of 2018 list.