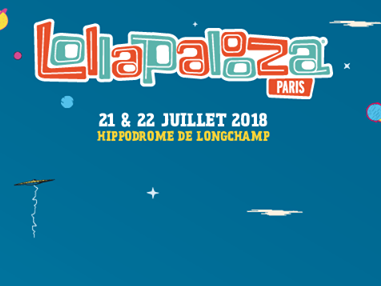 Lollapalooza Paris is the French capital's newest major music festival and a European satellite by the iconic festival brand.

After a spectacular Parisian debut in 2017, the second edition will once again see a lineup of music megastars perform across 3 days at the city's famous Hippodrome de Longchamp.

With a specific 'Kidzapalooza' area, a lineup that spans multiple genres and a famously inclusive atmosphere, the festival creates a fantastic environment where every music fan is welcome.

A near-timeless force in electronic rock and pop music, Depeche Mode have for over three decades defined an undeniably seminal - and constantly evolving - sound that has continued to be as popular as it is inventive. Together since 1980, Depeche Mode have had fifty songs in the UK singles chart and thirteen top 10 albums, with sales exceeding 100 million worldwide. This is a testament to their enduring presence as some of the greatest hearts and minds behind the synth-pop revolution and an unmistakable influence in modern music.

The world has gone ape for the celebrity hip-hop supergroup primarily conceived by Blur frontman Damon Albarn and Tank Girl artist Jamie Hewlett, a sound defined by alternative hip-hop and pop sensibilities and framed by hilariously twisted cartoon band members. Gorillaz have enjoyed multi-platinum success as well as a plethora of awards and nominations - an outstanding achievement for a mere "virtual" band!

Like the wildest rollercoaster imaginable, Missouri City, Texas-born and Los Angeles-based multiplatinum iconoclast Travis Scott flips popular music, culture, and fashion upside down. Bathed in bright lights, scents of carnival pleasures, and the climactic screams of millions worldwide, his third full-length album, ASTROWORLD [Cactus Jack Records/Epic Records], opened as the undisputed, undeniable, and ultimate musical attraction of 2018 catapulting it to #1 on the Billboard Top 200. Acclaimed by Pitchfork, Entertainment Weekly, Rolling Stone, and more and gracing the cover of GQ, this takeover paved the way for his second MTV VMA performance, ASTROWORLD Festival in Houston, and a gargantuan arena tour in 2019. The Houston rapper’s live shows have become the stuff of a legend with Billboard writing, 'Travis Scott’s penchant for raging, off-the-wall live shows have become an essential part of his career'.

Renowned for his party rumbling blend of '80s hits, dirty South hip hop, bhangra, Baltimore club and even the Favela Funk of Rio Di Janeiro, Brazil, Diplo has kept the crowds on the dance floor from Texas to Tel Aviv.

Parov Stelar aka Marcus Füreder is a musician who lives and works in Linz, Austria. He performs with his band - the Parov Stelar Band - and as a DJ worldwide. The Austrian musician has taken over the global music scene like a phantom in recent years. Through his music the modest but exceptional talent has not only gained an enormous fan base, but has also achieved cult status as a producer. His retroinfluenced music is borne out of an aura of elegance, wickedness and pure energy. Inspired by styles and samples from the most varying of genres (soul, pop, jazz and swing) and combined with modern beats and grooves he creates an incomparable and peerless sound.

Starting as a trumpet player and studying music theory, Kalkbrenner later switched to focus on electronic music which would lead him down the path to become one of the world's most well known DJs.

Welsh legends, Stereophonics, stormed into the public eye in the 90s with their blend of alt rock and soulful pop. Almost three decades on, Kelly Jones and company continue to deliver their combination of energetic pop hooks and bittersweet lyrical storytelling to the delight of an adoring audience.

Since their formation in 2005, Portugal. The Man have captured the attention of the indie scene with their extraordinary amalgamation of electronic beats, complex melodies, and atmospheric post-rock soundscapes.

Firmly a phenomenon in their home country of Iceland, the four-piece band Kaleo is now set to descend upon foreign shores, bringing their gorgeous blend of folk, blues, country, and rock to a wider mainstream audience in America. Their isolated heritage inspires a unique take on familiar sonic elements, resulting in diversity and freedom on each and every breathtaking track.

Dillon Francis first appeared on the radar after playing an exclusive Moombahton set at the Boiler Room, receiving the attention of Red Bull Music Academy. Recently he has been touring North America with Nero, plus delving in to other influences like dubstep. An eclectic showcase like no other.

Years & Years have produced soulful electronic pop, rooted in '90s RnB since their formation in 2010 and have cited TLC and and Aaliyah as influences. Originally formed as a three-piece, frontman Olly Alexander now leads the direction of music as a solo project.

Krewella is an American electronic dance group, formed in 2007 and consisting of songwriting/vocalist sisters Jahan and Yasmine Yousaf accompanied by producer Kris “Rain Man” Trindl. Their music is a blend of self-produced electro-house and dubstep, sometimes with influences of drum and bass and progressive house all culminating in a fantastic live performance.

Described as 'the coolest band around', BRMC have a moody black-clad image which reflects their strong Sixties-influenced alt-rock sound. Somewhere between their eight albums and journeys across the highways of the world, Black Rebel Motorcycle Club found their way. BRMC consists of bassist Robert Levon Been and guitarist Peter Hayes, joined by drummer Leah Shapiro, replacing Nick Jag, who left the band in 2008.

Infectious cumbia from Colombia mixed with techno, hip-hop and reggae.

Zara Larsson is a pop singer famed for winning the Swedish version of TV talent show 'Got Talent'. Her infectious brand of dance-pop and R&B has scored her a string of chart hits including 2018's UK no.9 single 'Ruin My Life', while her 2017 album 'So Good' reached no.7 in the UK, no.1 in her native Sweden and hit the top 10 in five other countries.

One of the most exciting guitar bands to burst through in the UK in recent times, Catfish and the Bottlemen formed in 2007 in North Wales. Their debut album, The Balcony, reached number 10 in the UK Albums Chart and they won their first Brit Award for British Breakthrough act in February 2016. This was followed by the release of their second album, The Ride, in May 2016 and their third album, The Balance, released in April 2019. Since then the band have shown no signs of slowing with numerous tours and festival headlining slots under their belts.

FIDLAR is an acronym for a profane phrase that underlines the attitude of the band. Formed a couple of years back, weened on a diet of house parties, skateboarding and generally enjoying life to the max, the band have come to the fore with their own take on their influences - surfier, faster, more fuzzed out and more personal than any of them. They perform full-scale drunken melodies on attaining their own debauched idea of the American Dream. Live shows have also included tracks by Creedence Clearwater Revival, Warren Zevon and Blink 182 amongst others and does further to enhance their reputation.

Vancouver hip hop prodigy and Drake affiliate. Known for his captivating collaborations and thundering club remixes, Ekali has been making waves in the electronic community for the past few years.

Marius Listhrop is a British artist that raps under the moniker Scarlxrd. He is known for his unusual musical style which combines heavy metal and trap music.