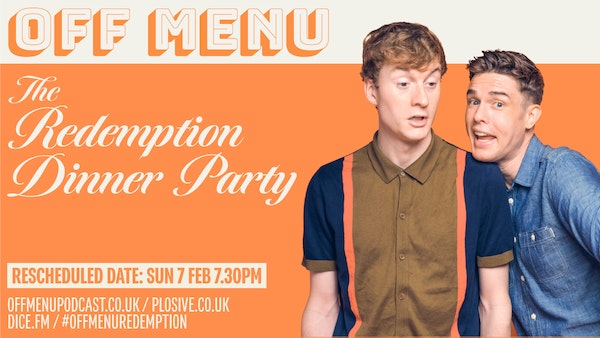 Off Menu - The Redemption Dinner Party

In a very special live-streamed show, Ed Gamble and James Acaster invite some of Off Menu’s most talked-about guests back to the dream restaurant to re-live their contentious meal choices. Will they stick with their orders, or will they take a once-in-a-meal chance to change their minds? You are cordially invited to The Redemption Dinner Party.

*£1 from every ticket goes to FareShare, the UK’s longest running food redistribution charity.

This is a live-streamed show only, it will not be released as a podcast episode.

(This show was originally planned to take place on January 24th.)

Comedians Ed Gamble and James Acaster invite special guests into their magical restaurant to each choose their favourite starter, main course, side dish, dessert and drink. Ever wanted to eat your dream meal? It's time to order Off Menu.

Greg Davies has written and starred in three series of Man Down (Channel 4), but is also known for being Mr Gilbert in the hit TV series and films The Inbetweeners, the Taskmaster in… Taskmaster (Dave), King Hydroflax in Doctor Who (BBC One) and was BAFTA-nominated for playing Ken in Cuckoo (BBC Three/Two). Greg Davies was named in Ents24's top 5 biggest selling comedians of 2016.