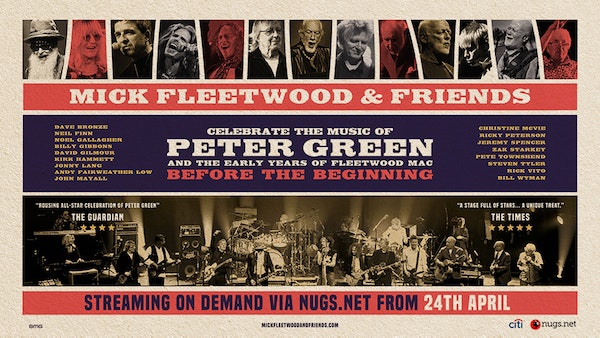 Mick Fleetwood and friends celebrate the music of Peter Green and the early years of Fleetwood Mac.

Following the 1-year anniversary of the Mick Fleetwood & Friends concert which took place at the iconic London Palladium on 25th February 2020, it has now been announced that the show will be streamed live via video on demand.

The concert was originally due to be screened in cinemas globally, however, due to on-going Covid-19 restrictions, as well as audiences who were unable to be there on the night for this historic show clamouring to be able to see it, the show will premiere exclusively online at nugs.net in HD and 4K streaming video with Dolby Atmos sound from 24th April 2021 at 8PM BST, and will then be available for 5 days via video-on-demand.