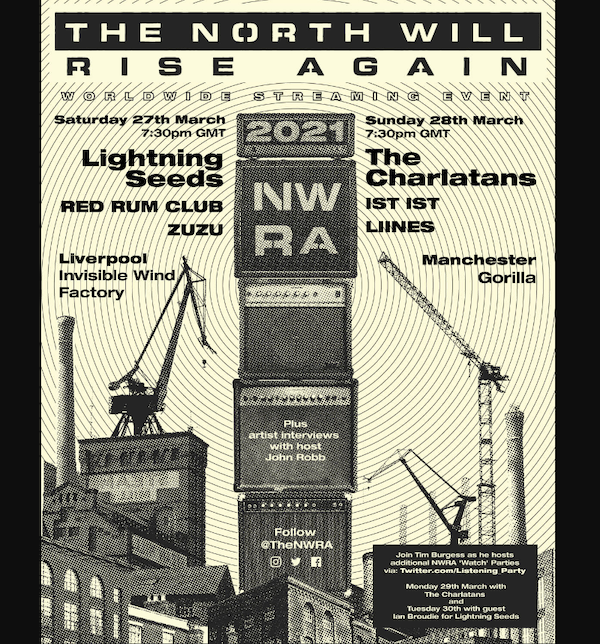 See all dates for The North Will Rise Again

The North Will Rise Again

Known for their famous rivalry, Liverpool and Manchester have reached hands and hearts across the M62 and come together to host The North Will Rise Again, a live-streamed micro festival.

Crucibles of the nation’s music industry, these great northern cities have united to highlight the catastrophic damage caused by Covid-19 to the north’s live music scene and its eco-system. The proceeds from The North Will Rise Again will go to charities Liverpool Music House and The Music Venue’s Trust #saveourvenues campaign whilst also providing work for independent venues, production staff and film crews that have been hit hard during the pandemic.

In support of #SaveOurVenues and The Music Venue Trust.

This show was rescheduled from 30th January 2021.

The wispy pop outfit the Lightning Seeds is essentially the solo project of noted producer Ian Broudie. Following major success on both sides of the Atlantic in the 90s, Broudie made an attempt to modernise the Lightning Seeds’ sound on 1999’s Tilt, but the album's commercial reception was less than overwhelming and he decided to put the group on hiatus. Following the turn of the millennium Broudie produced a number of bands on the Liverpool 'cosmic scouse' scene, including Coral and the Zutons, and 2004 saw the arrival of Tales Told, Broudie's first solo album under his own name. Two years later Broudie re-formed the Lightning Seeds with a new lineup for live appearances, and in May 2009 the group's sixth studio album, Four Winds, was released.

Zuzu's hook-centric indie rock assimilates the noisy spirit, tunefulness, and swagger of the Brit-pop and Merseybeat of her hometown of Liverpool.