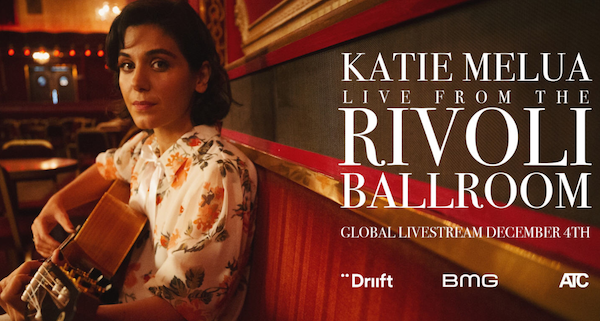 Multi-platinum musician Katie Melua is delighted to announce a worldwide, ticketed global livestream concert in conjunction with Driift. Following phenomenal reviews for Album No.8, Katie’s eighth consecutive UK Top 10 album and BBC Radio 2’s Album Of The Week, the Georgian/British singer-songwriter and her band will perform in one of London’s most spectacular venues, the historic Rivoli Barroom.

When Georgian-born Katie signed with Mike Batt’s Dramatico Records in September 2002, no-one could have imagined that by the release of her third album, Pictures, she would be the biggest-selling UK-based, female artist in the world that year. Her first two albums, ‘Call Off The Search’ and ‘Piece By Piece’ both became international number ones, and the story was to continue, after an exciting, record-breaking rollercoaster ride involving several massive world tours and many special moments – like Katie playing on stage for Nelson Mandela with her idols, Queen, or performing for or dining with The Queen at Buckingham Palace. Almost two decades on, Katie still continues to travel the world performing to sold out crowds.