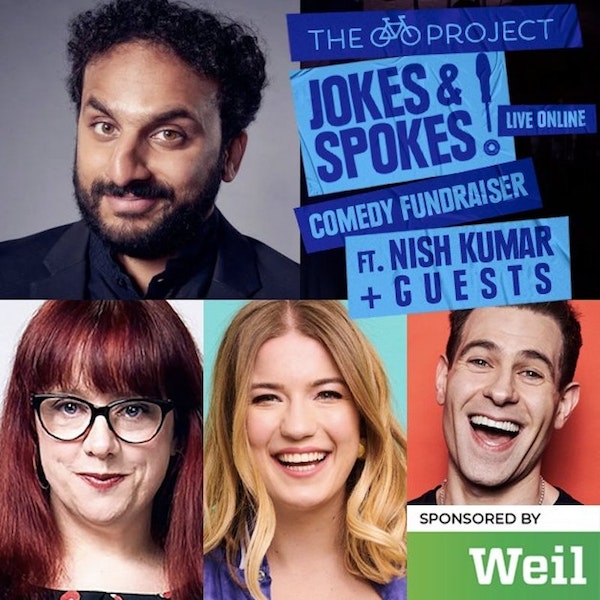 Still stuck at home? Get ready for a good old tier-up with our charity comedy night Jokes and Spokes: Lockdown Laughs. Beaming straight to your home via an online stream, join your favourite comedians while raising money for charity!

Feast your eyes on this stellar line-up: Nish Kumar, Angela Barnes, Olga Koch and Simon Brodkin - all performing their heart out for our Lockdown Laughs event!

Our charity helps refugees get access to bikes, as they are not legally allowed to work and can only live on £37.75 a week. A bike is more than just transport. Help us raise money while enjoying a cracking comedy night with some incredible talent!

Olga Koch does stand-up comedy onstage and creates cathartic performance art in the privacy of her own home. She has trained at the UCB Theatre in New York, as well as the Soho Theatre and the Free Association in London. Along with fellow Soho Young Company comics, she runs Joy Multiplication, a monthly comedy night in London. Olga is a confident girl. Finalist - Amused Moose National New Comic Award 2017 Finalist - Leicester Square New Comedian of the Year 2016 Regional Finalist - Funny Women Awards 2017 Selected for BBC New Comedy Award 2016 & 2017 "I would expect to see her make inroads into the comedy scene fairly quickly" (Chortle). "Hugely charismatic" (Broadway Baby).