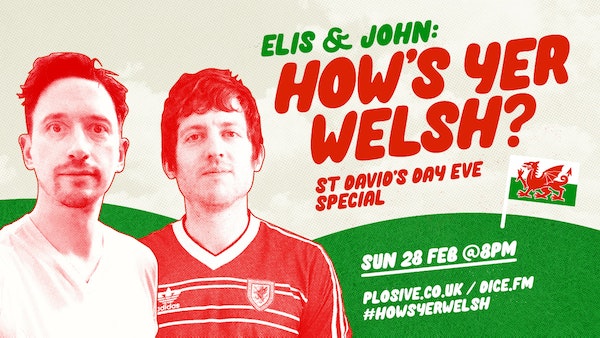 John will be dishing out Welsh facts, Elis will probably mention Gareth Bale, and they'll be ticking off a brand new taste.

*£1 from every ticket is split between the fantastic domestic violence charity Standing Together Against Domestic Violence and Dr Mz youth drop in centre in Carmarthen.

For FAQs on how to stream see here: bit.ly/34O88vP For any questions contact help@dice.fm.

Cardiff-based stand-up comedian. A versatile comic actor whose character creation 'Rex' is a regular feature on Rhod Gilbert's BBC Radio Wales show, Elis' profile has been boosted with frequent appearances on BBC Radio One Wales, two critically acclaimed Edinburgh solo shows (The Most Cautious Little Boy in Wales – 2009, and Daytripper – 2010) plus numerous appearances on the UK comedy circuit including tour support act for Rhod Gilbert. Paired with comedian John Robins, Ellis also presents a weekly show on Radio X. In addition, their podcast, The Elis James and John Robins’ Show, has become cult listening – gaining them a devoted following, over 14-million downloads and a regular fixture in the podcast charts – and the pair have even written a book together! 'He hypnotises the audience into loving him. There's also a laugh every ten seconds or so which overall makes it a complete joy' (Time Out) 'An intensely likable performer, he manages to get the audience to share in the heat of his unlikely passion, and you'll be rooting for him throughout his various misadventures' (The Guardian).

Mike has supported Rhod Gilbert on his sold-out national tour, written and performed how own show at The Edinburgh Fringe Festival, been a regular guest comedian on BBC Radio Wales, and regularly performs, and headlines, at some of the best comedy clubs and theatres across the UK. His comedy style could be described as mix of observation and exasperation, although really funny would be accurate too!

Welsh comedian and comedy writer who has appeared on Ask Rhod Gilbert and written material for TV shows Live At The Apollo, Never Mind The Buzzcocks and The King Is Dead. Lloyd's hearty comedy crawl is a delicious blend of jokes, stories, observations, ad-libs, one-liners, accents, theories, topical gags and self-deprecation. 'Particularly brilliant' (Fest) '... an undiscovered genius' (The Guardian).