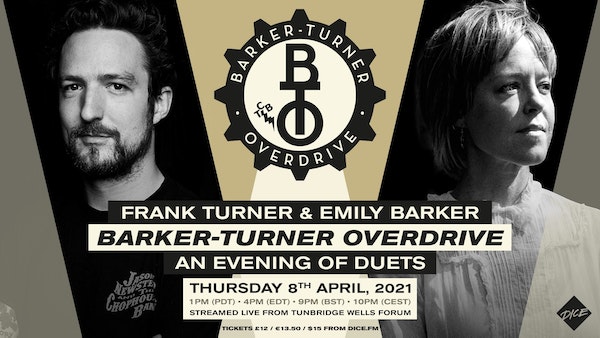 Barker-Turner Overdrive: An Evening Of Duets

On Saturday 19th August 2006, as every Saturday back then, bands, fans and friends gathered inside the sweaty darkness of Brixton's beloved Windmill music venue, as part of the regular "Sadder Days" night, organised by London alt-country heroes, The Tailors. Emily played a set with her band, The Red Clay Halo; Frank was in the crowd, glued to the performances.

Emily thinks that Frank offered her a tour support straight after; Frank remembers not being popular enough even to share the stage with her back then. But if you can remember, you weren't really there, right? Either way, a bond was formed, a collaboration and a friendship started that's now nearly old enough to buy a drink.

Over the years, many of you will have seen them perform 'Fields of June' or 'Old Flames' together, but for the first time, they'll share an entire set of duets ranging from country classics to glam pop, with some rare originals, and a brand new song - written together and debuted at the livestream - thrown into the mix.

Accompaniment is from Matt Nasir, Lukas Drinkwater, Jess Guise, and one of the UK's finest string quartets, Carducci Strings (with arrangements by Joe Duddell). Performed live from Tunbridge Wells Forum with full production, we hope you'll join us for the 'Barker-Turner Overdrive - An evening of duets' because you ain't seen nothin' yet!

This stream will be available for 24 hours on-demand.

For FAQs on how to stream see here: bit.ly/34O88vP For any questions contact help@dice.fm.

Acclaimed singer-songwriter Emily Barker released her new album A Dark Murmuration of Words on September 4th 2020. Produced by Greg Freeman and recorded at StudiOwz, a converted chapel in the Welsh countryside, A Dark Murmuration of Words takes Barker’s clear, expressive vocals and warm acoustic aesthetic and subtly shifts her sound in the direction of contemporaries such as Laura Marling and Phoebe Bridgers. Lyrically probing, by turns both dark and optimistic, Barker searches for meaning through the deafening clamour of fake news and algorithmically filtered conversation, delivering a timely exploration of the grand themes of our age through the lens of what it means to return “home.” Throughout the ten songs that make up the album, Barker draws connections between the familial, the local, and the global: a mother sings to her unborn child, asking for its forgiveness on ‘Strange Weather’; ‘When Stars Cannot Be Found’ explores the humbleness and comfort of the night sky when far away from home. Other highlights include the nostalgic ‘Return Me’, Woman Who Planted Trees, the gloriously defiant ‘Machine’ and the effortless album closer ‘Sonogram’. "an album of spare, striking beauty" Mojo ★★★★ “...a kind of Australian equivalent of PJ Harvey’s Let England Shake” UNCUT 8/10 “bold, direct, uncompromising” CLASH “a high-class piece of songwriting and beautifully expressed musicianship” Americana UK 9/10 "irresistibly catchy...an album replete with nooks and crannies, light and shade" The Australian ★★★★★ “an album full of grace and danger" RnR ★★★★★