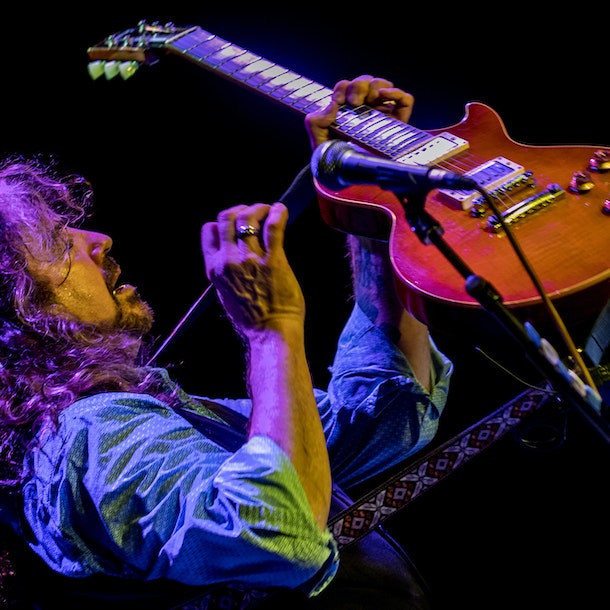 Warner E. Hodges: Gunslinger World-renowned six-string pioneer, Warner E. Hodges, continues to blaze trails with his signature brand of guitar driven rock. Visit www.warnerehodges.com to feast your ears! Born in Wurtzburg, Germany, Warner cut his teeth on the music of his father, Edger, a serving U.S. Army officer, and his mom, Blanche, who both fronted a USO country music outfit on base. The Hodges family settled in Nashville TN upon returning to the states and Warner soon found himself playing drums in his parents’ band. The bolt of lightning that compelled him to switch to guitar hit at an AC/DC concert in 1973. By the end of the 70’s, the punk movement had invaded Music City U.S.A. and Hodges’ high octane approach to life and the guitar were a perfect match for the burgeoning DIY scene. These early sparks were about to catch and Warner’s legacy was about to begin. Fast forward to 1981. “Help Me Warner Go!” Both words of warning and a battle cry, all in one. Signaling the spinning, smoking, spur-wearing Hodges to action in front of rabid fans of Jason & The Scorchers, the mold-breaking, original wild child of rock n roll aggression and country music roots. The WEH sound is the perfect volatile mixture of these juxtaposed musical brothers. Part Jimmy Page, part Don Rich, Warner blends the two like no other player in history, period! With 10 albums to their credit, The Scorchers are still turning on and inspiring a new generation of alt-country fans and artists. They are the first recipients of the Americana Hall of Fame Lifetime Achievement Award and recently celebrated their 30 year mark with a live DVD release. Visit www.jasonandthescorchers.com for more details. Warner E. Hodges is a busy man these days. In 2009, he joined Dan Baird & Homemade Sin, has recorded five studio albums, including 2017’s Rollercoaster, and has relentlessly toured internationally with the former Georgia Satellite. A new studio album is also in the works. Always searching for new creative roads to explore, Warner formed The Bluefields in 2011, an American rock group from Nashville, where he can stretch his imagination on instruments ranging from Les Paul’s to ukuleles! The band has recorded 3 well-received studio albums, including 2014’s Under High Cotton. When Hodges hits the road in 2018, it’ll be a while before the dust clears. 2018 will see Homemade Sin cross Europe in the spring and fall, with dates in the U.S. this summer; in addition, Warner will be bringing his latest albums Right Back Where I Started and Gunslinger to life for European fans on his solo tour this fall. Check out www.warnerehodges.com to find out where and when WEH will burn through your town!