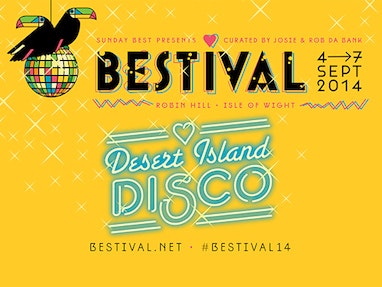 Bestival is an award winning 4 day boutique music festival set at Robin Hill – a beautiful leafy country park (a veritable Garden of Eden!) near Downend and Newport in the heart of the Isle of Wight.

The wonderful world of Bestival was born out of ten fun years of pioneering music events and record releases from Rob da Bank’s Sunday Best empire. The BBC Radio 1 leftfield DJ had a dream to one day create his vision of how the modern day festival should be. Along with Creative Director and wife Josie da Bank and co founders / partners John and Ziggy from Get Involved that dream is now fulfilled. On a mission to change the face of independent festival culture, the fearless foursome are bringing some magic to the shores of the Solent and spreading the love worldwide.

Beck's rambling collage of sound is built up from cryptic Dylanesque lyrics, Delta blues, hiphop and rock'n'roll. Blended in a carefree, lo-fi style, his sound is original and has earned huge critical acclaim. Beck continues to produce innovative material and looks set to become one of his generation's great singer-songwriters.

OutKast's blend of gritty Southern soul, fluid raps, and the rolling G-funk gives them universal appeal as they continue to push musical boundaries. Their unique blend of jazz, blues, soul, rock and world music along with some good old fashioned hip hop laced with their Southern sensibilities has constantly set the world on its ear! From Southernplayalisticadillacmuzik to Idlewild, Andre 3000 and Big Boi have consistently delivered booty shaking brilliance and their live shows are the stuff of legend!

London-based alt-soul songstress with a heart-melting vocal presence and a Billie Holiday influence. The Hackney-born singer draws on diverse influences from her colourful past, including working as a magicians assistant, actress, burlesque performer and trained contemporary dancer, and uses unconventional theatricals and props to make her stage shows original, engaging and magical.

Annie Mac is far more than just a Radio 1 DJ, she's a global ambassador for dance music in all its forms, from deep house and techno to bass music and drum and bass. Besides heading her prime time radio show, she also DJs across the world and champions new music in the form of her annual 'Annie Mac Presents' compilations. She even runs her own festival in Malta, Lost & Found.

Chase (Will) & Status (Saul) have been hailed as 'the most exciting producers in the UK today'. They met at Manchester University through their mutual love of drum and bass in the mid nineties and have DJ'd ever since. Their frenetic formula of raging riffs and high octane breakdowns earned their acclaimed album 'No More Idols' double platinum status, whilst their baffling, on-the-fly manipulation of dirty, ferocious beats has attracted a devoted global fan base, who live and breathe that tumultuous bass driven sound.

Jack Revill was made out of fluff, an old hair clip and a scratched old 7" record in the early 1980s when Mrs Revill was cleaning out the back of her old wardrobe with a brush. Jackmaster has constantly felt the silent call of black plastic noisy discs wherever he has roamed - and now shepherds his brethren around in cardboard boxes to record players far and wide whilst perfecting his art in many of Glasgow's dance music discotheques.

T. William's DJ sets and productions ride the line between House and UK Bass. As head of label Deep Teknologi he is behind one of the most interesting new labels to emerge from London as part of the recent Bass Music explosion.

Leeds University alumni, international chart toppers Sigma met while balancing raving and studying, working in record shops and promoting events to top up their student loans. While some don their artist mantle when the occasion demands it, Cameron and Joe have made Sigma their 'life' since graduation. Early releases with Hospital Records, Viper, Bingo and DJ Fresh's Breakbeat Kaos, as well as their own Life Recordings, quickly marked them out as producers to watch, while remixes for Eric Prydz, Ellie Goulding, Stylo G and Sway began to take them to a wider audience. The world, it seems, is now their oyster.

Future Garage inspired music from this Bristol duo. Eton Messy are quickly becoming part of British heritage. With fingers firmly on the pulse of electronic music they’ve grown from a small Youtube channel to a strong platform for up and coming artists. On top of this they have provided an on point mix series that’s seen them go from DJing around the country to hosting their own stage at this year’s Gottwood festival.

Bonobo, aka Brighton-based DJ and musician Simon Green, makes beautifully chilled beat-driven music drawing close comparison to the works of DJ Shadow and Mr Scruff. His combination of downtempo, hip hop, funk and dub with catchy melodies skilfully immersed in organic, pastoral atmospheres has seen him quickly grow in popularity since his debut album Animal Magic in 2001. 2017 saw the release of 6th album Migration, reaching no.5 on the UK album charts.

Reggae Roast have steadily built up a reputation for hosting one of the most vibrant monthly Reggae events in London that is all about creating a respectful atmosphere where people can enjoy the best reggae music Recently Reggae Roast have been in high demand, playing at clubs across the UK including regular sets at Fabric, spreading their message of conscious roots music and positive vibes. Over the past 3 years Reggae Roast have hosted some of the biggest names in the business, including: Lee ‘Scratch’ Perry, Collie Buddz, Sly & Robbie, Finley Quaye, Mad Professor, David Rodigan, Suggs (Madness), Mungo’s Hifi, Channel One Sound System, Iration Steppas and Adrian Sherwood.

The Jenova Collective are a production / DJ duo and a seven piece live Electro Swing act from Leeds. 'Fresh faces amongst the swing scene, it's easy to forget that these two 90's kids have been collaborating for barely a year, and yet have managed to stamp their bouncy, pumping sound in a host of major UK cities and festivals and have even played Berlin's biggest Electro Swing night! Previous tracks have fused swing with house, disco, latin and even drum & bass and "Do The Strand" marks their entrance to ghetto swing. These two love to dance and Jenova Collective DJ sets are full of energy, topped to the brim with party edits and dance floors fillers. They have shared the stage with the likes of Dutty Moonshine, Defunk, Max Pashm, Lamuzgueule, Jinx in Dub, Freear and Wolfie Razzmatazz to name a few!'

DJ Penny Metal pops up with her bag of Mad Tunes at The Cross Kings fresh from conquering Berlin, Paris and Vienna with her quirky mix of unpronounceable Russian and Eastern European music. Infamous for her fluffy hats and boldly playing tunes no one else dares, she invites you to drink vodka and dance wildly.

70s chart topper playing all their hits, most notably 'In The Summertime" along with the likes of "Baby Jump", "Long-Legged Woman Dressed In Black", "Lady Rose" and "Alright Alright Alright".

Resident with Space in Ibiza.

Before Zane began presenting his new music show at Radio 1, both he and Dan co-presented the well respected All City Show in its early days at XFM as well as winning numerous awards for his output on the station's Music Response show. Now, with daily output on MTV and Radio 1, Zane, one of the key figureheads in UK radio, tours the country playing to packed venues on a regular basis. He brings an electrifying presence to any club both musically and in personality.

Bondax are genre defying electronic duo Adam Kaye and George Townsend from Lancashire. They rose to prominence in 2012 via the BBC’s Introducing platform, where the duo received accolades from DJs including Annie Mac and Nick Grimshaw. Since then they have graced stages across US and South America, Asia and Australia and the UK including Glastonbury and Bestival.

A Manchester based dance producer.

A founding member of Boy Better Know along with Skepta, JME has built up his own record label and T-Shirt brand. Wiley helped launch Boy Better Know and has featured on the singles 'Too Many Men' and JME's solo track 'Side Tracked'.

Renowned for his party rumbling blend of '80s hits, dirty South hip hop, bhangra, Baltimore club and even the Favela Funk of Rio Di Janeiro, Brazil, Diplo has kept the crowds on the dance floor from Texas to Tel Aviv.