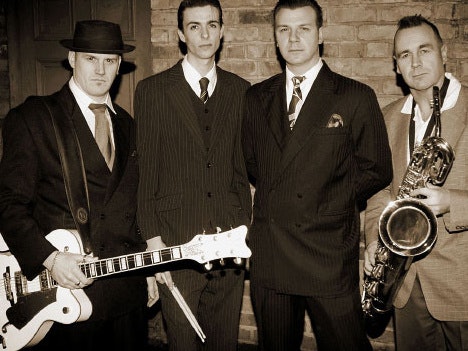 Scorching a trail across the live music venues of the land is this sizzlin’ hot 1950’s R&B combo...

Established within the ‘hotbed’ of the North East music scene in the UK, they power out jumpin’ hot rhythm & blues in their own indomitable hard hitting style.

Over the last two decades, The Revolutionaires have established themselves on the UK and European Rockin’ circuit, as well as the Blues scene.

They have toured extensively both in the UK and abroad, performing at festivals in Ireland, France, Belgium, Luxembourg, Holland, Germany, Norway, Denmark, Italy, Spain, Malta and Dubai.

Now also touring with their Big Band project which consists of extra horns and pianist, The Revs are hitting the Festival circuit with this power house line up and big sound.

Fifties swing and rock'n'roll direct from Newcastle. The band that just wants to make you dance! Even if you can't dance you just gotta tap yer feet.