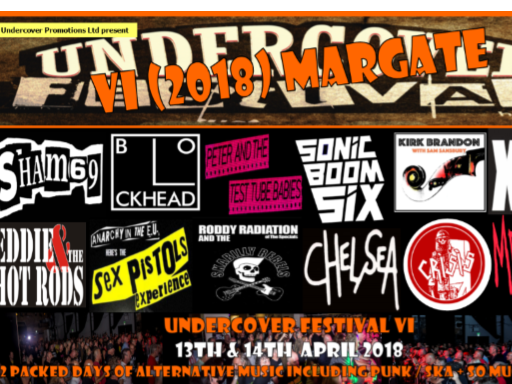 Undercover Festival VI a 2 day celebration of alternative music including Punk / Ska / Alt / Acoustic and so much more.

Undercover Festival is returning in 2018 to the unique setting of Dreamland Margate in Kent a venue and experience that defies all other conventions and festival templates.

Not only do we have a cracking line up but festival goers can experience many retro rides and amusements plus it is once again held undercover i.e. not outdoors so if it’s peeing down come April it’s not a problem and your beer won’t get diluted. Leave your wellies at home, and enjoy one of the best small alternative festivals the South has to offer in APRIL 2018.

The 2 day line-up includes some cracking local bands and so much more over two stages is shaping up to be an unmissable event. We believe we have most bases covered.

Already announced are Sham 69 and The Blockheads and many more to come.

The festival is one that prides itself on taking an independent and grassroots approach to things, and is always determined to be different from mainstream events, with two days of alternative action from bands you’d be highly unlikely to see on many other festival line-ups.

“When we said it was the home we were looking for since we started as a festival in 2013, we meant it and I am pleased to be able to announce that we will be back at Dreamland Margate for 13th & 14th April 2018”

Plans are in place for an even better Undercover VI, we are putting the finishing touches to what we believe is a mouth-watering alternative music event.

I thought we could not beat the line-up we had for 2017, but I think we have. said Festival Organiser Mick Moriarty.

As we say at Undercover “Se Ya Down The (Sea) Front!

Formed in Hersham in 1975, Sham 69 became one of London's must-go-see bands. Their first single, 'I Don't Wanna', produced by John Cale (formerly of Velvet Underground) was released on Step Forward Records in '77, its success prompted Polydor Records to sign them up. Jimmy Pursey, founder member and singer with the legendary punk band, has reformed the band with Dave Parsons (guitar), Dave Tregunna (bass). Due to popular demand, they return for select gigs, to play Classic Sham and new material.

Roddy Radiation, the main man with The Specials, is back bringing his 2-Tone sound to a new generation.

Kirk Brandon is an English musician best known as the leader of the bands Theatre of Hate, Spear of Destiny & Dead Men Walking.