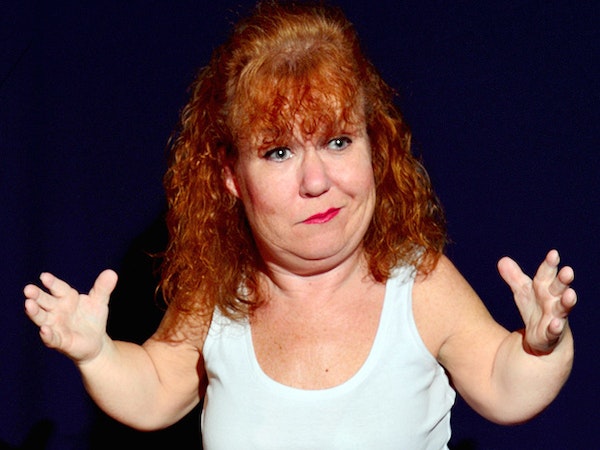 at The Lymington Centre
Passed

We bring you the sensational Tanyalee Davis.

As seen on:
The John Bishop Show (BBC1)
Live at the Apollo (BBC2) and many more!

Bringing you the best names on the circuit, here’s some more about our TV headliner: At 3’6?, Tanyalee is the Ferrari of comedy – low to the ground and kind of racy. Canadian born, Tanyalee inspires, enlightens, and entertains her audiences and is making the stage her home by touring all over the world and bringing the funny!

Tanyalee’s perception of people, and how they perceive her, exaggerates the humour of life’s “little” tasks and routines. Tanyalee has made a small yet significant dent in the entertainment scene thus far, What she lacks in height she makes up in tenacity. Known as “the little lady with a lot of BIG laughs.”

“Tanyalee Davis is simply one of the funniest people I know. She has a unique view of the world and if you haven't seen her I urge you to go, sit back, relax and laugh.” John Bishop

“A master of physical punctuation” The Las Vegas Sun

“Touch you, amaze you, entertain you hugely, cleverly crafted, Tanyalee is a punch-packing standup” The Scotsman

Opening the show is Luke Honnoraty who is highly regarded as one of the best acts to emerge from the south west in recent years. Award winning stand-up comedian Luke burst onto the circuit in 2010 as the winner of the 'South West New Act of the Year' on his 3rd ever gig.

Luke has gone from strength and is now performing alongside the best names in comedy in some if the UK's best comedy clubs. Having supported the likes of Matt Richardson, Russell Kane, Katherine Ryan and Joel Dommett. An infectiously funny, natural born comic who is the perfect addition to any comedy line up.

''I wont be surprised if I'm writing for this guys own TV show in the next 5 years!'' Gary Delaney
Also performing on the night is Andrew Watts who has a distinctive style and very original material. Lawyer turned comedian, Andrew is extremely likeable and invariably wins a crowd over as he canters, like an apologetic tsunami, through challenging subjects. His posh boy humour is intelligent without distancing himself from the audience.

“His distinctive style stands out – a winning mixture of pomposity, insecurity and emotional incompetence, while the fury-inducing importance he places on the trivial makes for a winning comic stance.” - Chortle.co.uk

Come along with a group of friends, your other half, or on your own and you will receive the Coastal Comedy welcome, hosted by comic Adrienne Coles.

At only 3 foot 6 inches, this American lady is the Ferrari of comedy - low to the ground and pretty racy. Her unique perspective is trained on subjects from dating, shopping, the daily routine of life and marriage. A little lady with a lot of big laughs. In 2012, Tanyalee supported the amazing Frankie Boyle on his national UK tour and is also part of Abnormally Funny People, an ensemble show, performing throughout the United Kingdom. 2012 also saw her star in Season 1 of CH4's hit TV show "Im Spazticus". The show was so successful that she was subsequently invited back to star in a bigger role in Season 2, which aired in late 2013. ‘Joan Rivers meets a pile driver’ - The Scotsman. “Tanyalee Davis is simply one of the funniest people I know. She has a unique view of the world and if you haven't seen her I urge to go, sit back, relax and laugh. ” (John Bishop)