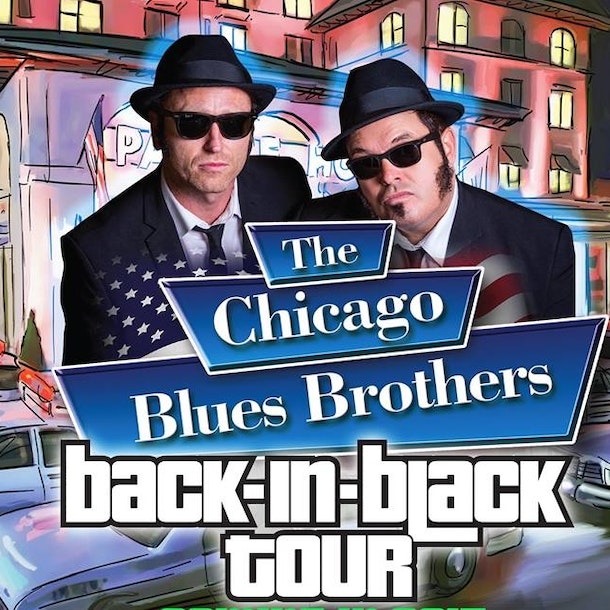 The Chicago Blues Brothers - A Night At The Movies

Direct from London’s West End, join the Chicago Blues Brothers and their 11 piece band, for a brand new 2-hour all singing, all dancing hit parade bringing you the greatest movie anthems of all time, performed live in concert.

Featuring songs from Footloose, A Star is Born, Dirty Dancing, The Greatest Showman, the Full Monty and many more, not forgetting all the much loved Blues Brothers classics, with a ton of surprises and lots of lunacy.

Staying true to the legacy and style of Jake and Elwood, performed in the crazy, upbeat and hard hitting style that has made The Chicago Blues Brothers one of the most successful theatre shows touring the globe.

Dig out those trilbys, shades and polish your dancing shoes because we are bringing the party to you in this 2 hour spectacular of non–stop music and laughter. You’ll dance, you’ll sing, you’ll have the time of your life.

The award-winning spectacular is Europe’s biggest and best-loved production of the Blues Brothers. The show is a high-octane, adrenaline-pumping musical mash-up that presents the best material from the original Blues Brothers movies and is jam-packed full of songs by legends such as Aretha Franklin, James Brown, Otis Redding, Ray Charles, Tina Turner, Cab Calloway – plus many other blues, soul, Motown and funk classics and a few surprises thrown in along the way. Capturing the sound, energy and persona that propelled the film to a cult status that still thrills audiences worldwide today. Back with a brand new production for 2017 with an all new elaborate stage set the Chicago Blues Brothers are taking you back to 1980 to finish the concert at the Palace ballroom hotel. This show is a powerhouse two-hour song-fest with over 40 hits performed live on stage in the concert that never finished. The Chicago Blues Brothers is a joyous hoot, a musical riot, a juiced-up jamboree of the coolest, funkiest soul, blues and Motown hits performed with style, class and showmanship by a troupe of some of the finest entertainers working in modern musical theatre. Infectious, dazzling, riotous, exuberant and spirited, the legacy of Jake and Elwood has been jump-started for a new generation with an energy that’s impossible to resist. The Chicago Blues Brothers are on a mission once again – in a high-octane, on-stage party you can’t afford to miss.