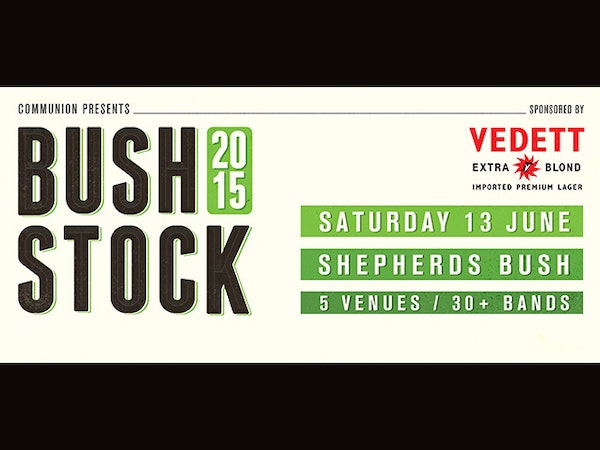 See all dates for Bushstock Festival 2015

Adam French is an up and coming singer/songwriter and multi-instrumentalist (piano, guitar, bass and drums) from the northwest of England. He's strongly influenced by guitar bands and his dad's old record collection. Anything from Johnny Cash to John Lee Hooker, Otis Reading to The Clash. "My music's about past experiences. Life, death, love and everything else that I've encountered up to now. If you can take any one little thing from what I've written then I've accomplished exactly what I set out to do, relate to my past and present in my very own, unique way."

Nottingham-based urban singer-songwriter who blends reggae, soul, and a touch of hip-hop in his delivery.

See We All Are tour dates

Beach Baby are an indie guitar pop four-piece from Dorset and Athens who met at Goldsmiths College in London. "Some of the Cure’s early moody majesty, only combined with the dynamics of Nirvana and the stoned triumphalism of The Stone Roses" - The Guardian.

Shrewsbury Blues boy Dan Owen has a winning combination of deep husky voice and choirboy looks. Described as “a phenomenal talent” by Mick Fleetwood, his performance earned him “Young Artist of the Year” at the British Blues Awards.

Originally started as a two-piece in 2012, Glaswegian Honeyblood has a sound that has been described as 'slacker-grunge-garage-rock', but founding member Stina Tweeddale prefers to call it ‘crunch-pop’. Her sound has drawn comparisons to recent favourites Best Coast and Frankie Rose, along with hints of 90s female guitar heroes the Breeders and Throwing Muses. Three albums in, Stina has decided to claim the sole spotlight of the project and said that makes sense, as Honeyblood has always been Stina's voice. Before it was even a band, or a name, Stina was writing the songs that would form the backbone of the band's identity.

Lisa Mitchell is finding a voice all of her own in her candy-coated folk-pop. Her music embodies the tenderness of Laura Marling, the wordplay of Regina Spektor and the free spirit of Feist, but Lisa nonetheless inhabits a magical world that few other artists are exploring.

Having raised herself on music with her family home’s piano and a guitar she bought from a shop on the way to school, Lucy Rose began writing songs of youth and nostalgic fragility, which developed with an increasing awareness of the world. Her music has a sombre yet hopeful tone, which has been successful in the career she has developed from a young age. Rose’s career began in London, where instead of attending her planned place at University, she began collaborating with other musicians such as Jack Steadman, the frontman of Bombay Bicycle Club.

An acoustic soul singer/songwriter based in London.

With his acoustic sound and timelessly soulful voice, British singer/songwriter Michael Kiwanuka emerged to acclaim in 2011 combining folk, indie rock, and R&B with traditions borrowed from his Ugandan heritage. Drawing favourable comparisons to Curtis Mayfield, Terry Callier, and Van Morrison, Kiwanuka earned a Mercury Prize nomination for his debut album, 2012's Home Again, and won the BBC's Sound of 2012. He further cemented his reputation as a gifted and rootsy performer with his sophomore album, 2016's Love & Hate, which went gold, landing at number one in the UK.

A young singer / songwriter from South London who is heavily influenced by artists such as Patti Smith, Iggy Pop and The Stooges, The Velvet Underground, Lou Reed, Irma Thomas and more. Reminiscent of artists such as Lykke Li and Bat for Lashes, Misty’s sultry vocals and acoustic songwriting imply influences ranging from rockabilly to garage rock. Having already been featured in the Guardian and the Telegraph, Misty is definitely one to watch for 2013.

Port Isla are a Folk / Alt / Baroque Pop band hailing from Norwich and London. "A potent blend of Fleet Foxes, The Shins and Belle & Sebastian." -Concrete

This Macclesfield five-piece deliver guitar-driven dreamscapes. They have been featured on the Transformers soundtrack.

Rebecca Clements is a young folk singer/songwriter from the Southwest of England.

Irish indie quartet The Academic are already deemed hometown heroes in the heart of Ireland with a No. 1 album to their name. Their songs make a quick impact, they’re sharp, buoyant and explosive and with arena-sized choruses, it’s no wonder Mick Jagger personally selected them to support The Rolling Stones in Dublin.

The Amazons are a blistering, melodic rock quartet from Reading. Fusing the sheer force of Nineties punk and grunge (Nirvana and Rage Against The Machine) with the melodic sensibilities of more contemporary acts like Bombay Bicycle Club and Tame Impala, The Amazons are beauty and aggression wrapped together harmony.

In a country that boasts an ever growing and internationally acclaimed electronic music scene, the boys from Byron Bay have earnt their place as one of Australia’s most promising young acts.

Vaults prefer to let their music do the talking – a sparsely melancholic sound fronted by eerily ethereal female vocals. Fans of Lorde, Chvrches, and Tove Lo, will fall in love with their diverse patchwork of electronically driven ideas. Having released a remix EP featuring mixes from the likes of Maya Jane Coles and Jacques Greene, Vaults have graduated from the same school of sound as James Blake, The xx and London Grammar. Their spacious, sparse, haunting musicality has won them fans across the board.

2010 Mercury Prize nominees Villagers, fronted by the captivating Conor O'Brien, were billed in 2009 as the 6th 'best Irish act right now' by the Irish Times, before they'd even released a single song. A year later and debut album 'Becoming A Jackal' met with great critical acclaim, a brooding collection of fragile, emotional, dark and heartfelt songs blending acoustic, modern folk and alt-rock elements. Fans of Sparklehorse and Neil Young will find much to love in Villagers, along with an inevitable comparison to Bright Eyes (both lead singers are even called Conor!).

British born by way of Norweigan and Pakistani parentage, Nadine Shah is a vocalist/pianist from a small North East town called Whitburn over looking the waves and jagged rocks of the North Sea. Having earned an early reputation for that uniquely rich, soulful voice; Nadine released her debut album Love Your Dum and Mad to critical acclaim in 2013 and her 2017 third album Holiday Destination made the shortlist of the 2018 Mercury Album Prize award.

Singer/songwriter Sophie tries to paint pictures and atmosphere with words and a delicately-plucked guitar. A sound which began in the conventional female singer-songwriter vein is developing into something more poignant and ethereal.

Frances is a singer/songwriter from Liverpool. She was was an aspiring violinist when her teacher sent her to meet a film composer for career advice. On a whim, she played him a pop song she’d written for fun - and moved him to tears. Describing herself as a “little ginger cookie”, the Berkshire-born musician specialises in husky, confessional vocals and rolling piano figures that are easily comparable to Carole King. She’s drawn comparisons to the likes of London Grammar, Coldplay and Laura Welsh and is signed by Sam Smith’s management team. She eems destined to emulate his mass popularity.

Charlotte OC counts dressing up as a child and visits to Berlin where she wrote 'Colour My Heart' as her main influences. Her signature bewitching and unique 'spooky gospel sound' combines darkness and beauty just as much as Charlottes favourite place Berlin.

Nathaniel Rateliff fuses folk, indie-rock, R&B and soul, and his material delivers biting anthems on drink, women and the pleasures and pains of life, all delivered with a whiskey-soaked vocal. Listening to Rateliff is like spending a Friday night in Alabama drinking beer at a hoedown with authentic musicianship from a backing band who sound like they come from another time.