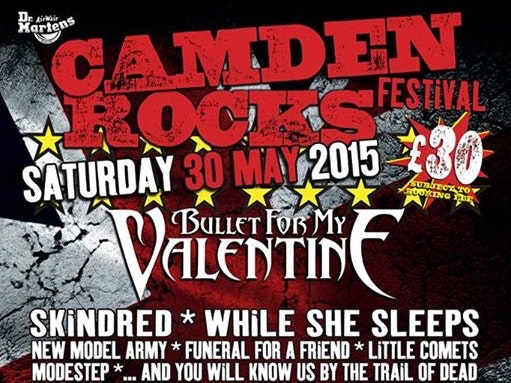 The rock n' roll street party of the year, Camden Rocks Festival, will be back in May 2015 for another fantastic day of live music.

Bullet For My Valentine

Bullet For My Valentine cite their main objective as writing rock songs the way rock songs used to be written. Aspiring to a love of acts such as Iron Maiden and Metallica, and an equal hatred of indie-rock, the South-Wales group have enjoyed an upward curve perpetrating their own brand of anthemic rock ballads.

A powerful mixture of ragga, punk and metal, Skindred have to be heard to be believed. With bits of dancehall, drum'n'bass and jungle thrown in for good measure, Skindred have a truly original sound; 'For Skindred, its all about the music, education, entertainment and 100% vibes.' (Benji – Skindred)

While She Sleeps are a post-hardcore five-piece from Sheffield. Since the release of their mini-album, ‘The North Stands For Nothing’, in the summer of 2010, While She Sleeps have been on a trailblazing path that has seen them become one of the fastest rising bands on the UK hard rock and metal circuits for some years. From a sold out headline tour, their tent-swelling set at Sonisphere festival, venues on the prestigious Kerrang! tour having queues of people snaked around the block so that fans could get in to see Sleeps open the bill, to critical acclaim across the pages of Kerrang! Metal Hammer and Rock Sound and regular plays on Radio 1, Scuzz and Kerrang! TV, the Sheffield natives have rapidly and justifiably become one of the highest regarded rock bands in Britain.