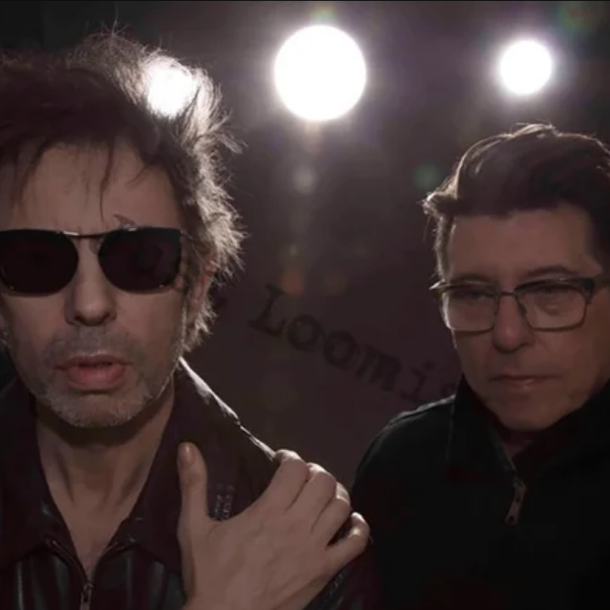 Eighties indie heroes whose majestic songwriting haunted a generation of bedsits and student pads. Re-formed in 1997, and still fronted by the inimitable Ian McCulloch, there's every cause to celebrate the Bunnymen's return. Their seminal albums 'Crocodiles', 'Heaven Up Here', 'Porcupine', 'Ocean Rain' & 'Echo & The Bunnymen' have all been a major influence for groups such as Coldplay, The Killers and The Flaming Lips whilst later albums 'Evergreen', 'What Are YouGoing To Do With Your Life?', ‘Siberia' & 'Meteorites' demonstrate what an amazing body of work the band have.

Scottish alt-rockers led by Roddy Woomble. Passionate rock'n'roll, brimming with restrained aggression, they reached their biggest level of success with singles 'You Held The World In Your Arms' (a UK no.9 hit) and 'American English'. While on a hiatus, frontman Roddy Woomble released several solo albums, while guitarist Rod Jones released material under his own name in addition to forming the band The Birthday Suit. In 2014, the boys reunited, completing a sold out acoustic tour of unique, intimate venues throughout the Highlands & Islands of Scotland, re-introducing themselves to live audiences after a half-decade break. Their 8th studio album followed in 2015, while 9th album 'Interview Music' was released in 2019.

Three-piece from New York City who have supported both The Strokes and The White Stripes. With stripped-down minimalism, the Yeah Yeah Yeahs fashion sassy garage blues-punk out of little more than a few carefully chosen chords and singer Karen's schoolgirl trill-turned-tortured hyena howl.

In a collision of science and music came the Filthy Dukes who have since struck fear and ecstasy into the hearts and minds of those who have witnessed them. These guys have been ripping it up big time for a few years now - the Dukes will rip the dance floor apart...bring a towel with you.

Purveyors of disco/ funk and full-throttle live shows, this Portland, Oregon band are set to shake up the UK music scene this year in a big way.

Formed in Detroit in 2000 by Jason Stollsteimer, The Von Bondies deliver haunting vocals and bluesy rock style that has been compared to The Strokes. After taking a hiatus, the band mark their 20th anniversary in 2020.

Wire are the undisputed originators of experimental postrock. Since their formation in London in 1976, Wire have maintained and advanced a musical project which treats the creative potential of a rock band as a fluid, amorphous medium. As removed from self-conscious intellectualism as they are from the inherent conservatism of much rock music, Wire employ their unique, endlessly restless and risk-taking creativity to question every aspect of songwriting, recording and performance. They delight and disturb in equal measure, troubleshooting the circuitry of perfect pop, or patrolling the limits of focused experimentalism. Having virtually drawn the map of modern guitar effects, they are cited as heroes by such diverse acts as Fugazi, My Bloody Valentine, Black Flag, Guided By Voices, and Blur.

Purveyors of Rolling Stone favourite single 'Rich Girls' and other pervasive gems of American Indie Rock, it's The Virgins, of course. After forming in 2005, the band's infectious EP wormed its way into the underground of New York City, their home. Signing to Atlantic in 2008, the band released their first album, The Virgins. The Virgins released their sophomore album Strike Gently in March 2013, supporting it with tours across the U.S. and internationally. The band played their biggest shows while supporting The Killers on their last two American tours. The support slot culminated in what would be The Virgins last hometown performance, a sold out show at Madison Square Garden. The band spilt up in late 2013, with lead singer Donald Cumming saying: "There's nothing I'd hoped to do with The Virgins that we haven't done. It's been an incredible experience and I want to thank everyone who was a part of it, but now it's time to move on. I'll see you in my dreams."

Formed from the ashes of previous bands in and around Southend, Essex, Baddies are 4 friends on a mission to make you listen, and listen you will. Theirs is a sound that flits effortlessly from Talking Heads to Queens Of The Stone Age in the blink of an eye.

Girl fronted Pixie-esque rock, formerly known as Slummin Angels. The East Londoners have been very busy since bursting onto the scene, having played in New York as the faces of Kangol's AW11 campaign, toured with Wolfmother and The Joy Formidable, and supported The CHarlatans, The Kooks, Nine Below Zero and The Rifles among others. They were the first resident band at Club NME at KOKO and count Lauren Laverne, Steve Lamacq and Billy Lunn as fans.

The Chapman Family play Disco Noir with stonking songs made for the dancefloor!

Danny & The Champions Of The World

Here come Danny & The Champions Of The World writing themselves large, giving themselves the space, and taking the time, to deliver a magnum opus. With Brilliant Light Danny Wilson has made his All Things Must Pass - a big record of hit after hit stretching over two albums plus a further bonus set of instrumentals. He’s allowed both himself and his band the absolute freedom to explore, experiment, and collaborate, and they’ve grabbed it with both hands. Hidden away somewhere in this diverse collection you’ll find the question “can we release ourselves back into the brilliant light?”. For Danny the brilliant light is creativity, but more than that it’s collaborative creativity, and the process of birthing these songs, both by design and then serendipity, has been to maximise the creative potential of all The Champs. The two previous Champs collections Stay True (2013) and What Kind Of Love (2015) were recorded in intensive ten day stints. The songs written and rehearsed, the musicians gathered in North London at bassist Chris Clarke’s Reservoir Studios and tracked everything at one fell swoop. This time around Danny wanted something different allowing an all-encompassing view of what the band was capable of. They started going into Reservoir once a month, recording what they had live, without too much reflection or correction, and then putting those results in a box and leaving them be. Every month saw a scramble to find songs to record requiring an encouragement to every band member to bring something to the table. Writing with guitarist Paul Lush for What Kind Of Love had proved liberating to Danny who’d rarely co-composed since writing with brother Julian for his previous band Grand Drive. It was exciting and rejuvenating. Scary too but reawakening, and so he’d repeatedly be asking, “have you got an idea for a song?” and as the months passed and the cache grew more things were tried; different configurations, other collaborators, and along the way a cluster of instrumentals arrived too. Of the eighteen songs here only ‘Waiting For The Right Time’ is solely composed by Danny; personal philosophy, reflections on Ronnie Lane, and a paean to neckerchief rock all rolled into one. It’s the same spirit imbuing his music-making all the way from the early Champs barn shows in rural Oxfordshire with cider and painted faces; it found particular expression on Streets Of Our Time (2010) but burns through Brilliant Light just as strongly and shows up in the singalong ‘Everything We Need’. Chris Clarke co-wrote that, and with John Wheatley of The Suburban Dirts came up with the soulful Arthur Alexander-ish ‘It Hit Me’. Guitarist Paul Lush provided ‘Never In The Moment’ - a hard-hitting number with a lot of brass and something akin to The Band doing ‘The Weight’ with The Staple Singers. The beautiful ‘Coley Point’, one of Danny’s personal highlights, sees him set a tune to words by Caught By The River‘s resident poet Will Burns. ‘Bring Me To My Knees’ and the cryptic ‘The Circus Made The Town’ are both co-writes with James Yorkston, while Polly Paulusma and Carra Bacon contribute to ‘Swift Street’. Deeply personal and inspired by three family photographs; Swift Street in Melbourne is where Danny’s mother grew up, and where in childhood he stayed with his grandparents. The song is near-Proustian in its recall of smells and tastes of past days. You can’t overstate the importance of family and friends to Danny. It was surely, in part, a kind of loyalty to Julian that he didn’t co-compose for so long after the demise of Grand Drive; certainly until now, and Andy Fairclough’s arrival, there had been no specialist keyboard player in the Champs. Andy brings a Mod sensibility, a jazz grounding, and a fearlessness to the band. He plainly pushes Paul Lush, already a key improviser in live performance. You see them raising the bar for each other in the run-outs of two of the longer songs; ‘Consider Me’ and ‘ Gotta Get Things Right In My Life’. Giving them free rein and allowing them the space to show what they regularly do on the stage was another reason for the extended format, though it’s not entirely coincidental that The Allman Brothers, and Al Kooper and Mike Bloomfield, have been much on Danny’s turntable over the last year or so. Thus Brilliant Light is shone on a year in the life of the Champs and all the pieces are seen in play; Chris Clarke on production duty, and with Steve Brookes comprising the formidable rhythm section. Geoff Widdowson still blowing on that alto sax, and Henry Senior Jr ensconced on the pedal steel. Robin and Joe Bennett from The Dreaming Spires, Siobhan Parr, Danni Nicholls, and Treetop Flyer Reid Morrison all singing along, and from time to time a pair of brass players (Gram Canyon and Craig Chapman) and another sax (Helleanor Fitt). The Champs are understandably proud of what they’ve achieved. Chris Clarke says outright it’s the best record this line-up has come up with so far, while for Danny it’s “a bit like taking a peek into somebody’s house; there’s great stuff that immediately grabs your attention, and then there’s other stuff and you start out thinking it might be a bit mundane but as the whole picture takes shape it proves to be incredibly beautiful”. That’s typical Danny Wilson, a brave stab at modesty but far too honest to sell himself short. He and his band are already much loved; for their whole-hearted openness, their democracy, and their sheer joy in what they do. They’re going to be loved too for this record. Very soon Brilliant Light will be the soundtrack to an awful lot of people’s lives, and that is no small achievement.

See Danny & The Champions Of The World tour dates

Dinosaur Pile-Up are a British alt-rock band led by singer, songwriter, and multi-instrumentalist Matthew Bigland, whose riffy, grunge-inspired sound has earned comparisons to Nirvana and Foo Fighters. Following a handful of smaller releases, they issued a pair of well-received, hard-rocking albums in 2010's Growing Pains and its 2013 follow-up, Nature Nurture. Although Dinosaur Pile-Up's on-stage personnel has fluctuated over the years, the consistency of their studio sound was a result of Bigland playing every instrument on many of their recordings. However, by 2014 they'd settled on a lineup that included ex-Brownies drummer Mike Sheils and Bigland's longtime friend and former Tribes bassist Jim Cratchley, who appeared on later records like their 2019 Parlophone debut Celebrity Mansions.