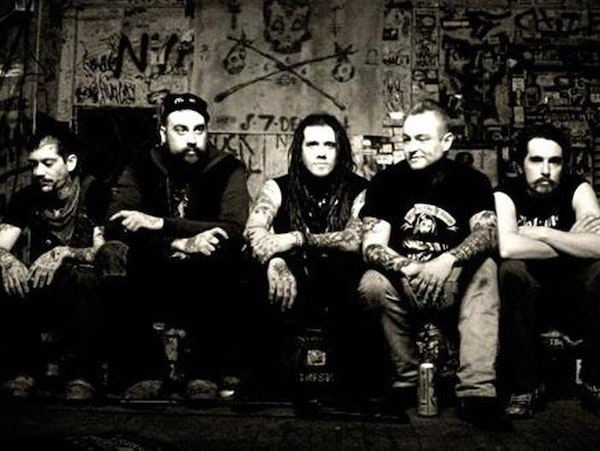 A five piece band from Detroit who describe their music as 'punk rock mixed with metal and bluegrass, with a touch of satan'.

Jo Carley and The Old Dry Skulls play a unique hybrid of early 20th Century music infused with dark imagery. Intense and compelling, they combine 1930’s voodoo sounds with a steamy broth of vaudeville, blues, skiffle, early ska and old-timey country. Singer Jo Carley is smack in the middle of the mix, with a snarl and a twinkle as she uses her sweet melodies to tell of terrible things. This is made even more bewitching as she switches from fiddle to mandolin to washboard. The driving force is Tim Carley’s one-man-band set-up with guitar, kick-drum and foot tambourine (the rattlin’ shoe)! They are joined by multi-instrumentalist James Le Huray on double bass and banjo. ‘Shake Them Rattlin’ Bones’ is their second album and was recorded at East London’s Space Eko Studios. It features nine tales that lure you between the cracks of reality and take you downtown to the underworld, where the hobos and down and outs are up to no good, jug bands hustle for change on poor man’s corner, zombies walk the night and the Voodoo Priestess rules all... Dedicated to the subversive, the world of Jo Carley and the Old Dry Skulls is dark, animated and unusual. A band that lives to perform, Jo Carley & The Old Dry Skulls seek to amuse and draw the audience into an underworld filled with wonder, the macabre and the imagination. They have been touring extensively up and down the UK and have taken their show across Europe to some of the best clubs and festivals on the circuit. Links: Website: www.olddryskulls.com Youtube: Get Down Low’ - youtu.be/6atb1OdM9UM