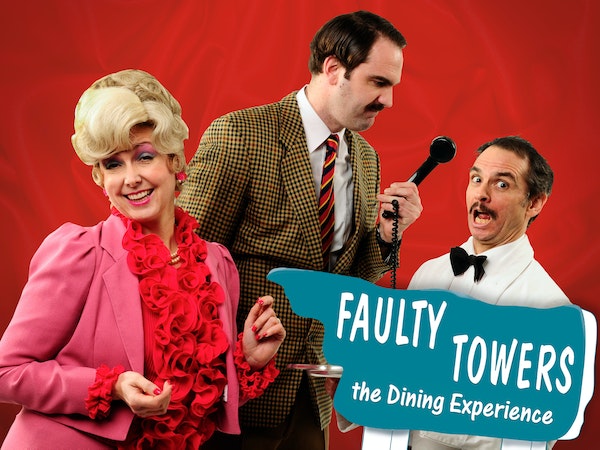 A top attraction of London’s theatre scene since 2012 and worldwide since 1997, this fantastic immersive show uses fantastic actors to put audiences right at the heart of the action.

Basil’s rude, Manuel confused, and Sybil cracks the whip… all the while dishing up yet more laughs and a 3-course meal. It’s an irrepressible, irresistible blend of top-flight improvisation and tight theatrical script, where ‘chaos’ reigns right from the start. Expect the unexpected in the show that’s 70% improvised!

The show is a proud member of TripAdvisor’s Hall of Fame, specially reserved for holders of TA’s Certificate of Excellence for five years on the trot. With over 22 years of continuous critical and audience acclaim and close on a million seats sold around the world, this is officially the world’s most sought-after tribute to the BBC’s Fawlty Towers and the most successful interactive comedy show of its kind – perfect for anyone and everyone keen for an unforgettable night out.

Faulty Towers The Dining Experience is the 5-star immersive theatre show that’s 70% improvised and wins acclaim internationally. Served a 3-course meal by Basil, Sybil and Manuel, audiences are promised plenty of laughs and interaction so it's ideal for comedy fans, theatre fans, and anyone who simply fancies an unforgettable meal. This true blend of ingenious comedy and unique theatrical script is a multi-sensory treat where chaos and fun reign right from the start. A resident feature of London’s comedy scene since 2012, the show ranks consistently high in TripAdvisor’s top London Theatre listings and holds TripAdvisor’s Certificate of Excellence for 2015, 2016 and 2017. It had its 20th birthday in 2017 and continues to tour the world. ‘Crammed full of laughs’ 5* Everything Theatre, London 2017 ‘Flawless… and I mean flawless’ 5* The Advertiser, Adelaide Fringe 2017 ‘Outrageously funny’ 5* BroadwayBaby, Edinburgh Fringe 2017