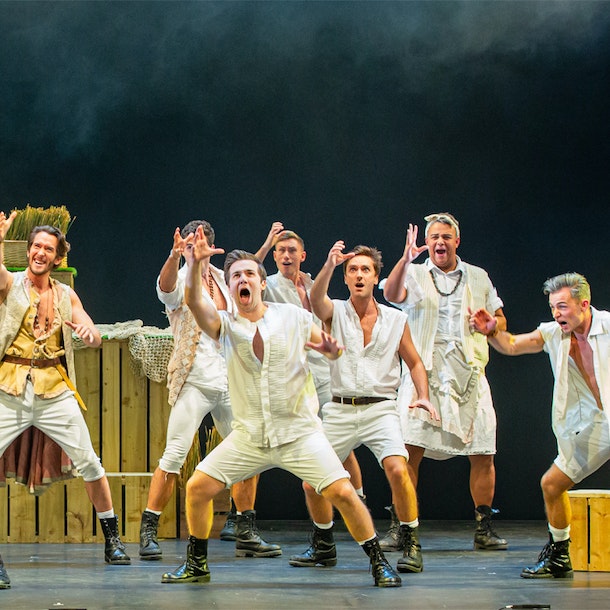 ★★★★
“gaiety, frivolity, vim and artistic rigour”
DOMINIC CAVENDISH, THE DAILY TELEGRAPH
★★★★★
“one of the most delightful, innovative, funny and musically rich interpretations of Gilbert and Sullivan”
JONATHAN EVANS, THE SPY IN THE STALLS

Due to popular demand, Sasha Regan’s award-winning all-male take on Gilbert & Sullivan’s THE PIRATES OF PENZANCE returns to screens from Monday 29th March – Monday 5th April 2021 on www.stream.theatre . Recorded live at the Palace Theatre London in December, just before Lockdown 2, the recent streaming makes a very welcome comeback over Easter. Whether we are still in lockdown or not, expect a much-needed dose of musical comedy in the comfort and safety of home. Features an abundance of gorgeous pirates and their winsome Victorian love interests! The perfect tonic to raise spirits at this difficult time and a show the whole family will enjoy.

THE PIRATES OF PENZANCE sees one of Gilbert & Sullivan’s best-known, much loved classic operettas recorded in a theatre founded by Richard D'Oyly Carte in the 1800s as the Royal English Opera House. D'Oyly Carte who was already producing comic operas at his Savoy Theatre, decided to commission the Opera House as a home for grand operas. The Royal English Opera House opened 10 years after the Savoy Theatre which championed Gilbert & Sullivan's well-known "Savoy operas". Although their operettas never ran at the Royal English Opera House, it opened in January 1891 with Sir Arthur Sullivan’s 'Ivanhoe'. Sadly, D’Oyly Carte's cherished opera house came under financial pressure leaving him with no alternative but to lease it and eventually sell it within one year of opening.

Sasha Regan’s production was first staged at her original 50-seater Union Theatre in Southwark over a decade ago. From day one it became a critically acclaimed overnight hit, winning Best Off-West End production in the 2009 WhatsOnStage Awards. Following several sell-out runs in the UK, the merry band of pirates toured Australia including a three-week run at the Sydney Theatre thanks to Cate Blanchett the then co-artistic director. It enjoyed another sell-out run at Wilton’s Music Hall last year.

Expect plenty of hilarity from the swashbuckling crew!

The performance will be streamed on: www.stream.theatre/season/26

Please Note: this is a ticketed event and only available at the scheduled times and dates. The timing of each stream is based on UK time, so please bear in mind when booking from overseas. There are number of different times to choose from to suit time zones. We hope you can join us.