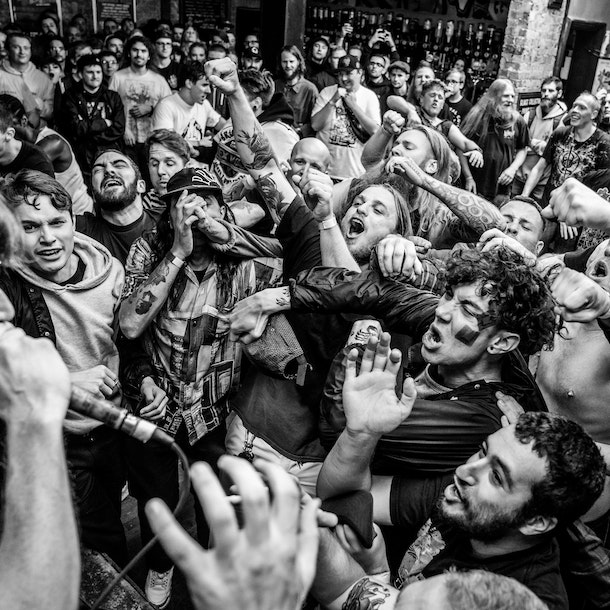 "The Hostiles bring the upbeat energy of US west coast ska punk to the less-sunny climes of west coast Scotland. Their take is spirited and infectious, combining distorted guitars riffs, low-slung rhythms, in-your-face vocals and a two-pronged brass backbone of trumpet and trombone. It’s a formula that’s helped the five-piece build a strong reputation on the live circuit as an act to be reckoned with, good times guaranteed. The punk and ska scenes’ big guns agree, with The Hostiles recently touring the UK with Reel Big Fish!" - The Skinny

Colt 45 is a three piece punk/alt rock band from Cumbria with big hooks and big riffs. They bring a fusion of rapid fire Punk Rock N Roll that showcases a range of influences as diverse as Polar Bear Club to Springsteen. Winning national plaudits from the likes of Kerrang! Magazine, Rock Sound, Big Cheese Magazine, BBC Radio One and more, Colt 45 are a testament to the phrase “substance over style”. Merging heartfelt, small-town frustration with melodic punk anthems and contagious hooks, the trio have worked their way up from the bottom by gigging relentlessly.

Faith n Fury are a hard rocking trio from south London. blending huge riffs and souring melodies together to create an explosion of musical energy that keeps you partying all night.

London alternative hard-rock quartet The Manic Shine are a multicultural mixing pot of flavours and sounds. Their own unique blend of alt-rock, classic rock and metal pulls influence from titans of modern rock as varied as Rage Against The Machine, Soundgarden, Led Zeppelin, ACDC, Hendrix and A Perfect Circle. Whether it's melodic crooning, racing thrash, screaming solos or a wall of unstoppable riffs bursting from a stack of red-hot Marshall amps, The Manic Shine’s music reads and sounds like a turbulent who’s who of the great and the good of the rock world built around a core of top class song writing that any of their contemporaries would be proud of.

Comprised of two members from Sweden and two from England, The Franklys play frenetic garage rock with heavy and psychedelic overtones á la Led Zeppelin-Blondie-Strokes-QOTSA-punk-pop-rock-madness. With extensive touring across both the UK, Europe and America, including festival slots at Isle of Wight, Download Festival and Camden Rocks, The Franklys are surely making themselves known as one of the most exciting live acts on the UK band circuit.

A three piece stoner-punk band from Redhill Surrey. Gleefully crashing across the UK's toilet circuit, the lads have been honing their chops and want to bring you big riffs, catchy songs and passionate, sweaty performances.