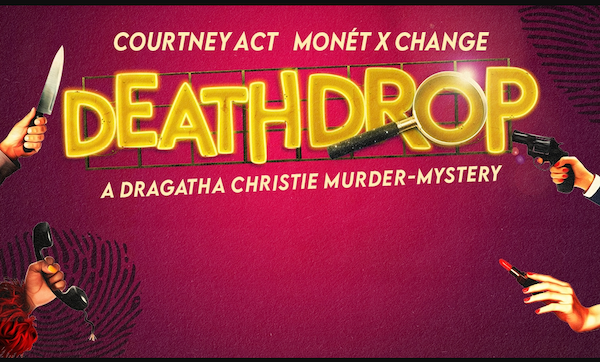 It's 1991 and a bangin' gang of guests flock to Tuck Island for a glamourous soirée that's absolutely to die for! The suspense begins to build up once they reveal their dodgy pasts, resulting in savage confrontation and ferociously fierce fingerpointing. One by one, the guests lip sync for their lives, leading up to a grand finale of epic proportions where we hilariously find out who did it! Packed with more ridiculous plot twists than a John Waters film, Death Drop is ready to work!

They say that nine tenths of a woman’s charm is illusion. Courtney Act is living proof. She has the ability to bring women to their feet and men to their knees, but she’s not like other girls… In fact the American government calls her an Alien Of Extraordinary Ability, Bette Midler has described her as a “sensation” and Chita Rivera says “Immense recognition is on the way”.