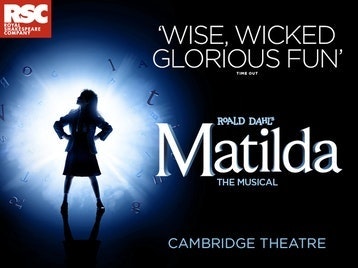 *Please note this show is currently suspended until 7th February 2021, please check back for information updates*

Roald Dahl's classic novel, loved by generations of readers, has been adapted in a hilarious new version by Dennis Kelly with songs by composer and comedian Tim Minchin.

In Matilda, the central character is a little girl with astonishing wit, intelligence and psychokinetic powers. She's unloved by her parents but impresses her schoolteacher with and, over the course of her first term at school, teacher and pupil have a profound effect on each other's lives.

Matilda - The Musical is the multi-award winning musical from the Royal Shakespeare Company, inspired by the beloved book by the incomparable Roald Dahl. After a six-year run in the West End, it is now touring the country. Written by Dennis Kelly with original songs by Tim Minchin, Matilda - The Musical is the story of an extraordinary little girl who, armed with a vivid imagination and a sharp mind, dares to take a stand and change her own destiny. Winner of over 85 international awards, including 16 for Best Musical, Matilda continues to delight audiences in London, Australia and on tour around the USA. 'Believe the hype' New York Post 'Easily the standout musical of the decade' Sunday Times