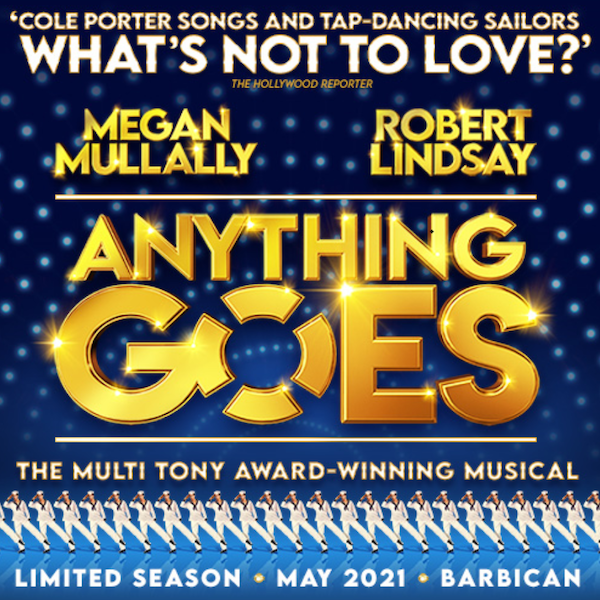 It's Bon Voyage on the S.S America but it’s not all smooth sailing as they head to sea; etiquette is cast-off through the portholes as two unlikely pairs set off on the course to find true love. Their journey proves that sometimes destiny needs a little help from a crew of singing and dancing sailors, a comical disguise, farcical blackmail, and some timeless good fun!

Making her West End debut is renowned actress Megan Mullally (Will & Grace) as Reno Sweeney who will be joined by star of stage and screen Robert Lindsay (My Family), as Moonface Martin. Kathleen Marshall’s previous Tony-Award winning staging of Anything Goes hit the high seas on Broadway, and this stunning production features a joyful score of theatre’s most memorable song, including ‘I Get A Kick Out of You’ and ‘You’re the Top’ is set to be the musical of 2021.

Although best known for playing the much loved role of Karen Walker in Will & Grace, Megan is an exceptionally experienced singer, having starred in Broadway productions of Grease, How to Succeed in Business Without Really Trying and the Mel Brooks musical, Young Frankenstein.

Robert Lindsay is a British stage and screen actor, most well-known for his roles with the Royal Shakespeare Company and for starring as Ben Harper in the BBC sitcom My Family.

Felicity Kendal is one of the country's most popular television and stage actresses having appeared in numerous TV series including The Good Life, Solo and The Mistress.

Comedian and musical singer, Gary hit the big time starring in the West End musical Me And My Girl in 1989. Since then, high profile roles in TV (Showstoppers) and stage (Carmen Jones, Copacabana and Oliver!) have established Gary as one of the top UK artistes.