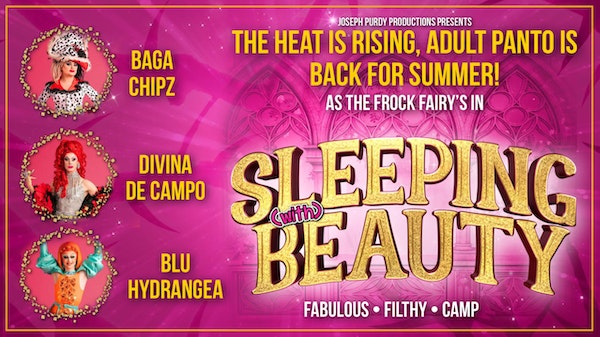 The heat is rising this Summer as Adult Pantomime Returns to Barrow - can you handle this?! Think Dream Girls meets Destiny's Child as Baga Chipz, Divina De Campo and Blu Hydrangea, best known from Series 1 of Drag Race UK headline 'Sleeping (with) Beauty' as The Frock Fairies.

As the Kingdom rejoice's the birth of the Princess Beauty; her christening celebrations begin - Baga, Divina and Blu aka The Frock Fairies bespoke their gifts upon the princess but when the evil minger, Carabosse, makes an unwanted visit. She leaves a curse upon Princess Beauty that on her 18th Birthday she will prick her finger and die as a result of not being invited to the christening. The kingdom is in bare despair!

Join us on this fabulously filthy, camp Pantomime Adventure to see if true love will still prevail and Prince Carl will get the girl. With lots of rude, crude and naughty jokes and gags from Muddles and Nurse Nelly plus a back catalogue of the cheesiest of anthems - this is one Adult Panto you do not want to miss!