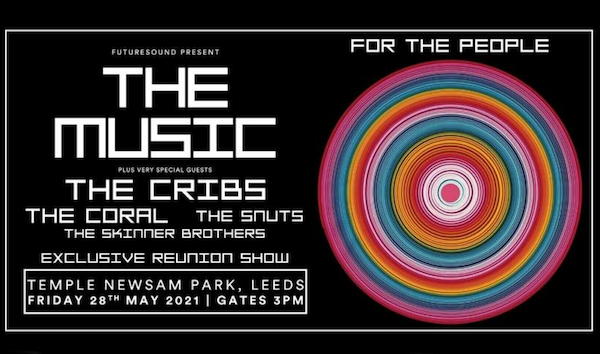 Originally formed in 1999, The Music were one of the most enduring bands on the indie scene. Influenced by the Madchester groups of the late eighties and early nineties, with a definite leaning towards the Oasis breed of loud, sleazy rock'n'roll. After ten years and three albums, The Music played their final shows in 2011 before going their separate ways.

From the unlikely beginning of a toilet paper factory in Wakefield to touring the world and notching up three Top 10 albums in the UK, The Cribs are masters of addictive, wiry indie pop suss. Since 2002 the Yorkshire men have produced passionate anti-hipster anthems including ‘Men's Needs’, ‘Mirror Kissers’ and ‘Hey Scenesters!’.

With an original mixture of ska, pop, punk and blues, all tied up with insanely catchy melodies. The band have consolidated their critical and commercial acclaim with numerous Top 10 albums and a slew of hit singles to boot.

Based in West Lothian, Scotland, this four-piece who grew up together are taking the Scottish scene by storm with their anthemic, sing-along indie tunes.

Formed in London in 2017, after deciding a life in music might mean they’d never have to work a real job again, The Skinner Brothers gained notoriety after joining The Libertines on their Tiddeley Om Pom Pom seaside tour on a personal invitation from Carl Bârat. With influences ranging from Sinatra to Oasis, The Skinner Brothers don’t really sound like anyone else.