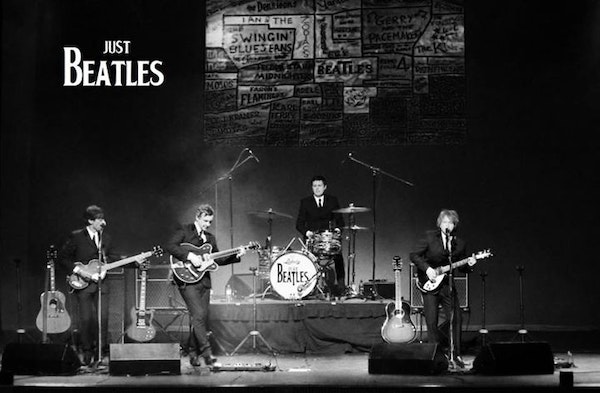 You'll Get Back to where you once belonged, take a trip down Penny Lane or perhaps even Twist and Shout when you join Just Beatles as they faithfully re-create the revolutionary sounds of The Beatles.

Expect a set that includes tracks from the early years of the Cavern right the way through to the Apple Rooftop show of 1969.

The Beatles' music is timeless, appealing to audiences of every age, bringing back memories and touching the hearts and souls of each new generation.

This concert promises to be a fantastic night to remember for all Beatles fans, young and old, new or long-standing.

Just Beatles have firmly established themselves on the tribute band scene in their native Scotland and have received invitations to play at Beatles festivals all over the UK and Europe, including the world famous Liverpool Beatleweek. During their two hour multi media show expect all the hits and more from the early days of “Love Me Do” and “She Loves You” through to the psychedelic masterpiece of “Sgt. Pepper” to classics such as “Let It Be” and “Get Back.” Every aspect of their performances have been perfected in their quest to emulate the Beatles, earning them rave reviews and making them one of the best tribute bands out there. Together with authentic instruments, costumes and equipment, they really capture the look, feel, and most importantly the sound of The Beatles in concert.