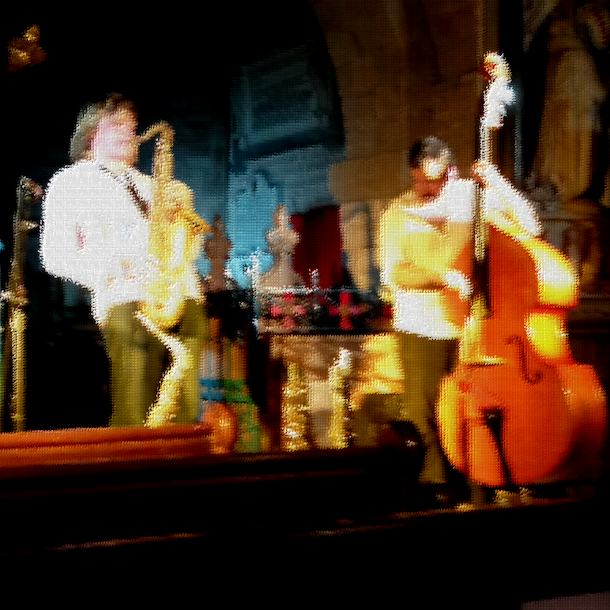 EIRA/SNOW; is a union between Caractacus Downes and Lyndon Owen, two multi-instrumentalists who combine influences as diverse as the music of the Celts to that of the Middle East, Spain to the lands of eastern Europe; a true fusion from two players who have a long standing and close understanding.
This enthralling and eclectic musical sound is conveyed by both the use of conventional instruments, saxophone and double bass, and less familiar instruments such as Armenian Douduk, Turkish Mey and Zurnah, Hungarian Tarogato, electronic tanpura, Gaita Gallega, Futujara and range of percussion.
An improvised gig one snowy winter’s evening led to the official forming of the duo, who are no strangers to events such as Brecon Jazz Festival and playing at the acclaimed Latitude Festival, but often found in acoustic venues such as Churches, Castles and Sacred Places.
Past performances have been received enthusiastically and left audiences enraptured. They are pushing new boundaries musically and the opportunity to experience the enthusiasm and mastery of these two talented and skilled musicians is not to be missed. Their empathy for each other and their instruments is palpable; their skill and their creative horizons infinite.
“ … there’s a sense of being taken on a musical ‘world tour’ at every Eira/Snow gig … but for all this Eira/Snow’s pieces are primarily folk tunes with infectious melodies and strong grooves and an essential simplicity that ensures that they remain accessible no matter how far the band may push them.” Ian Mann www.thejazzmann.com 1/2/2017

The Globe at Hay