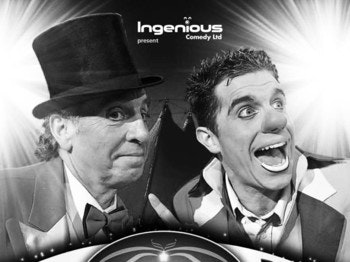 This show is over two hours of continuous laughter! Clive and Danny’s madcap hilarious humour and lunacy manages to cross all ages from children, teenagers, mums, dads and grandparents! This is seriously the funniest show you will ever see, don’t miss it!

If you haven’t been fortunate enough to see these guys before, you’re about to be introduced to a whole new experience and laugh like never before.

Clive and Danny are actually father and son and along with the rest of the team have audiences in tears of laughter from start to finish.

The guys appear at all three Butlins holiday camps throughout the year, families often booking their holiday around the date Cirque du Hilarious visit.

Get your tickets now and see what all the fuss is about, you won’t be disappointed! Take a look at the Cirque du Hilarious Facebook page and view comments left by the amazed fans of ALL ages. Never before, has there been an act that will leave every part of your body aching with laughter!!!

Now 15 years old, Circus Hilarious is creating laughter and mayhem all over the UK. Featuring the Best Comedy Award Winners, father and son Clive Webb and Danny Adams, together with award-winning clown Cousin Timoni and Mick Potts' legendary rock band 'Clownforce', they create side-splitting humour with all the fun, magic and excitement of the big top, guaranteed to make the whole family roar with laughter - not just kids, but Mum and Dad too! - making it the most hilarious family occasion you could imagine. In addition, unmissable slapstick comedy, magic, lots of surprises and world famous international artists, plus the stunning Circus Hilarious Dancers.