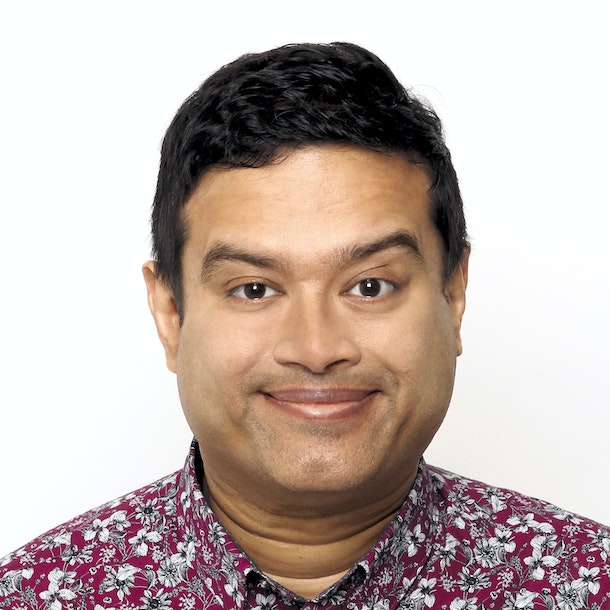 Thus far, Paul has lived his life content in the understanding that stability and emotional happiness were lovely ideas but not really for him.

Nonetheless, several decades of cheerfully bearing boozy witness to the narratives of others can slowly change a man. And so can a prosecco-fuelled Christmas.

General knowledge expert on the ITV quiz show, The Chase.

Paul Sinha is a qualified GP and international stand up comic of many years standing, having performed in all major comedy clubs in the UK, as well as China, Auckland, Singapore, the Middle East, South Africa, Netherlands and Germany. Paul's second full length solo show 'Saint or Sinha' received widespread critical acclaim at the 2006 Edinburgh Fringe Festival and was nominated for the if.comedy award (formerly the Perrier). Since then Paul has been in great demand, whether on TV shows such as Edinburgh and Beyond, World Stands up, Comedy Shuffle and Comedy Cuts, on Radio 4's Loose Ends and the Now Show, or his numerous contributions to Radio 5 Live and Talksport, as well as having recorded for Shane Warne's Ashes podcasts. 'Wonderfully inventive and intelligent’ (Evening Standard) 'One-liners are delivered with the crisp clarity of cut glass. Highly original' (Metro) 'Universal anecdotes as warmly delivered as you would find anywhere... it's a pleasure listening to him... Opinionated, witty and smart – Sinha is the certainly one of the comics Fringe goers should be flocking to' (Chortle) 'His confidence on stage was excellent and his talent for adlibbing and summoning gags off the cuff were very funny' (BBC Online).