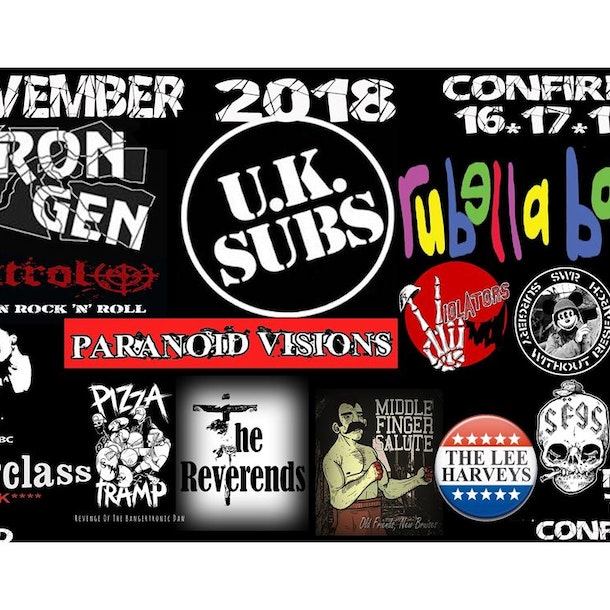 at The Carleton Club, Morecambe
Passed

Raised on a healthy diet of the Sex Pistols, The Clash and The Damned, Chron Gen are a punk band from Hertfordshire.

Rubella Ballet, constructed around the enduring nucleus of Sid Truelove and Zillah Minx, formed at a gig in 1979 when Crass invited their audience to use their equipment. The newly formed group took to the road with Crass and the Poison Girls, quickly establishing a unique niche and standing out from the multitudes in black combat wear with their vibrant visual image. After reforming in the late 1990s, recent gigs have shown that their power continues undiminished, with an original, atmospheric black UV light show and performances that continues to defy stereotypes. Their songs that have politically and ethically more than stood the test of time, highlighting the groundbreaking nature of Rubella Ballet’s original stage show, music and ideas.

Irish anarcho DIY punks who formed in 1981. They've since supported the likes of the Damned, Manic Street Preachers, Snuff and the Sex Pistols on their Filthy Lucre tour.

Mellow rocksteady to full throttle thrash, but mainly levelling out in the Ska/Punk genre - think Rancid, Specials, Inner Terrestrials and Crass, but as far and wide as The Paragons to Discharge.

Liverpool based, twin bass audio thugs... Recent press described our sound as "like being caressed by a monkey wrench" - we like that.

Borrowed Time are a punk band from the Cheltenham/Gloucester area. For those who like no-nonsense "old-not-so-old" school punk rock.