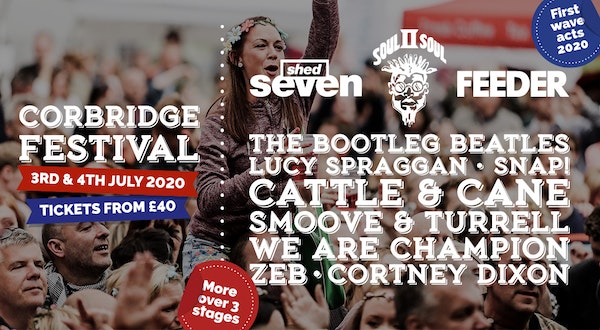 at Tynedale Rugby Football Club, Corbridge
View Tickets
£40.00
Discover your top matches amongst the lineup via our Lineup finder

The Corbridge Festival is a mid-summer music festival, tailor-made and lovingly crafted for the whole family. With its picturesque location, amazing music line up and magical atmosphere, this hidden gem of the North East is destined to be the highlight of your Summer!

First coming to main prominence in 2012 with her self-composed song 'Last Night' on ITV's The X Factor, Lucy went on to reach 9th place in the competition, and second place in her category. Since then she's continued to grow a devoted fanbase through her busy live schedule and top 40 chart albums. With a unique style of acoustic folk and pop, Lucy mixes humour, talent and honesty to create her own fresh sound. She has also created some epic Adele-esque anthems.

Cattle & Cane recently shared their euphoric and sun-drenched new single Mexico, which received early support from BBC Radio 2, Record Of The Day and Spotify, who featured the track on their prestigious New Music Friday UK playlist. Produced by Pete Hammerton (Kylie Minogue, The Shires, Wandering Hearts, Tom Gregory etc), the confidence and maturity on display delivers an enticing statement of intent from sibling duo Joe and Helen Hammill. “For the first time ever, we took a step back last year and actually thought about how Cattle & Cane should sound and where we want to take it” says Joe. “Being in a band isn’t always easy and sometimes it can take some time to find your way, but this is undoubtedly the most excited we’ve ever been about sharing new music” he adds. “We’ve always been ambitious,” explains Helen, “but I think locking ourselves away with Pete [Hammerton] for the last few months has enabled us to create some songs that really justify our ambition” she adds Cattle & Cane are capable of shifting even the hardest of hearts with their perfect soaring harmonies. Their finely crafted, timeless music has seen them share stages with the likes of Tom Odell, Brian Wilson, Stereophonics, Lewis Capaldi, Madness and The Head & The Heart. With countless sold-out headline dates across the UK under their belts, including statement shows in their native North East at Middlesbrough Town Hall and Sage Gateshead, Cattle & Cane have been making quite a name for themselves with their magical live shows. They’ve appeared at acclaimed international tastemaker events such as Canadian Music Week and Reeperbahn Festival, as well as at some of the UK’s finest boutique and inner-city festivals including Tramlines, Live At Leeds, Liverpool Sound City, Black Deer, Cornbury, Deer Shed, Twisterella, Stockton Calling, Lindisfarne, Long Division and This Is Tomorrow, not to mention the BBC Introducing stage at BBC Radio 2 Live in Hyde Park. As well as extensive support from BBC Introducing, they’ve picked up radio play from Elton John on Beats 1, Dermot O’Leary on BBC Radio 2, Anneka Rice on BBC Radio 2, OJ Borg on BBC Radio 2, Janice Long ‘Janice Loves’ on BBC Radio 2 & BBC Radio Wales, Tom Robinson on BBC Radio 6 Music, Frank Skinner on Absolute Radio, Gary Crowley on BBC London, John Kennedy on Radio X and numerous DJs at Amazing Radio. Thanks to playlists like New Music Friday UK, Your Coffee Break and Feelgood Pop, to name but a few, Cattle & Cane have accumulated almost 10 million Spotify streams. On TV, their music has featured on many TV shows including Sunday Brunch, Made In Chelsea, The Only Way Is Essex, Avenida Brasil and MTV’s Catfish. Further support for the band came from Middlesbrough FC, who printed the lyrics to ‘Infant Hercules’ on the club’s home shirts during the 2018-19 season: www.mfc.co.uk/news/infant-hercules-takes-pride-of-place-on-new-boro-shirts

Geordie duo with the smoothest funk and soul sounds. A fabulous live Northern Soul influenced band, combined with Turrell's gravel-voiced, classic soul man vocals. Their material draws on subject matters which are aimed to make us stop and think, with songs such as the politically charged ‘Hate Seeking Missile’ balanced fittingly with uplifting stompers such as ‘I Feel Alive’, guarantee to get even the most resistant of dancers toe-tapping.

We Are Champion - A Tribute To Queen

The North East's Premier tribute to the music of Queen.

Renowned for their work with SNAP! producers Luca Anzilotti & Michael Münzing have written more than one chapter in the history of dance music. Their international megahit “The Power” is not only one of the world's most played dance-tracks, but also the one that launched the “SNAP!-attack” 15 years ago, taking the world by storm and turning Anzilotti and Münzing into one of Europe's most successful producer teams.