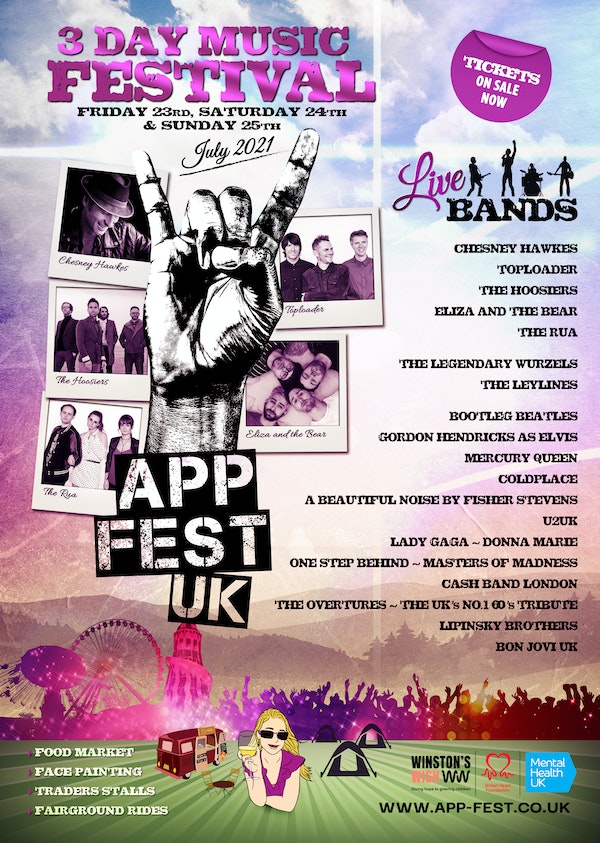 View Tickets
£30.00
Discover your top matches amongst the lineup via our Lineup finder

App Fest Tewkesbury 2021 is a family friendly three day music festival which looks to raise money and awareness for local and national charities through our love of great music.

London three-piece making tongue in cheek indie pop. The Hoosiers debut single, Worried About Ray, reached number 5 in the UK charts, while their first studio album, The Trick To Life, made it to number 1.

Undoubtedly still the one and only, Chesney Hawkes is a living legend. His career began in 1991 when he starred in the film 'Buddy's Song' alongside Roger Daltrey. Then came the infamous 'One And Only', Chesney's biggest hit and also the twentieth most successful UK release of the '90s.

Guaranteed to get you dancing in the moonlight, sunlight and any other light you care to mention, Eastbourne's favourite sons have come a long way since the release of the hauntingly catchy 'Achilles Heel' in 1999. A top five album, numerous festival headline slots, TV appearances and THAT song that made watching the Jamie Oliver adverts bearable have made them one of indie's shining lights. Capable of funky blues-rock and soaring string balladry, just try resisting the urge to sing along and tap your foot.

A five piece band from Essex who spent their first year together only performing in the close cofnines of a practice room in North London. One of the UK’s most promising young bands with guitar-driven indie-folk hooks reinforced by beautifully orchestrated horns, punctuated rhythms and the emphatic vocals of lead singer James Kellegher.

Mercury, having celebrated its 20th anniversary in 2019, has established itself as one of the world's most authentic tribute bands to Freddie Mercury and Queen. This award-winning, dynamic stage show has been wowing audiences from the UK to Dubai with its spectacular costumes, high class production inlcuding dramatic lighting and hugely energetic performance from Joseph Lee Jackson as 'Freddie', together with excellent musicianship, beautiful harmonies and intricate guitar work from Glenn Scrimshaw as 'Brian May'. Freddie Mercury's mum, Jer Bulsara, even said in 2010 that "Joseph, Glenn & Mercury are the next best thing" to the original Queen line-up. Don't miss it!

"Formed by Coldplay fans, for Coldplay fans..." Coldplace, are the UK's finest tribute to Coldplay. The band prides themselves on the passion they put into playing Coldplay's songs and the accuracy they achieve. Their ethos is to give the audience the nearest experience to seeing Coldplay themselves, not only by playing their songs live, but also transmitting the powerful feeling of Coldplay's songs direct to the audience.

A Beautiful Noise is the UK’s leading Neil Diamond Show as performed by the award winning artiste Fisher Stevens and his sensational 9 piece band. Celebrating all the classic hits of one of the world’s greatest ever singer songwriters, this is the ultimate musical journey that all Diamond fans, old and new, have been waiting for. Captivating audiences wherever he plays, Fisher Stevens produces a performance as close to the legendary man as you can get, combining superb vocals with a relaxed sense of humour to deliver a brilliant Diamond night of musical entertainment. This fully live spectacular re-lives over five decades of the legend’s most popular hits including, Love on the Rocks, Sweet Caroline, Forever in Blue Jeans, Song Sung Blue, I Am I Said, America, Holy Holy, Cherry Cherry, Crackling Rosie and many many more.

A full multimedia show performing all the world's greatest rock band's most popular hits throughout the years of U2's history with a full light show and kicking live music that will rock you to the soles of your feet and put you right into the heart of a live U2 gig.

A tribute to Madness with all the energy and presence of the original act - quite an incredible show. A must-see band!

A fabulous musical journey through the '60s, during which the Overtures not only play your favourite hits of the era, but also recreate the atmosphere of the time with film footage and over 1000 images of fashion, bands, ads and graphics to form a unique two-hour sound and vision show.

Donna Marie has always made a lasting impact on her audience and is now internationally recognised as the world's most authentic multi award winning Lady Gaga tribute act and show. Her uncanny natural resemblance to Lady Gaga and convincing and realistic performances, have audiences asking themselves the question, 'Who is the real Gaga?' Even Lady Gaga's management couldn't tell the difference! 100% sound alike vocals, jaw dropping replica costumes, Gaga choreography and so much more...

Aided by many late nights and a plentiful supply of hard liquor, Ben would often sing Johnny Cash songs to his mates, strumming along on acoustic guitar. Being a drummer first, it took a bit of coaxing from family and friends before Ben decided to take the Cash alter-ego seriously. “I have always felt a bit weird about pretending to be anyone else other than myself, so the concept of being Johnny Cash didn’t really appeal”, says Ben. “People were continuously telling me I had to do something with all this Cash stuff, so I decided I would start taking it more seriously, but the word tribute was key. I would pay my respects to the man by getting his stuff out there again; reaching out to established and new fans, but in no way would I try to be him."

Featuring brothers Adam and Alex Lipinski, this acoustic duo deliver classic songs from the 60's, through to popular modern day covers. Their repertoire is extensive and features songs by the likes of classic bands such as The Beatles, The Kinks and The Rolling Stones, as well as more modern artists such as Crowded House, Kings of Leon, Oasis, Sterephonics, The Killers and Mumford & Sons.

Midlands based tribute who really capture the look, the sound and the electric atmosphere of the original Bon Jovi. Their set list includes classic anthems like 'Keep The Faith', 'Bad Medicine', 'Blaze Of Glory', 'It's My Life' and many more, and of course always features 'Living On A Prayer' during the encore!

The Leylines are a 5 piece band formed and based in Weston-super-Mare. Inspired by the Levellers and the rolling hills of the west country, their songs combine British social commentary with a folk/rock festival get up. There will be fiddles and there will be drinking stories... or Jigs and jugs perhaps?