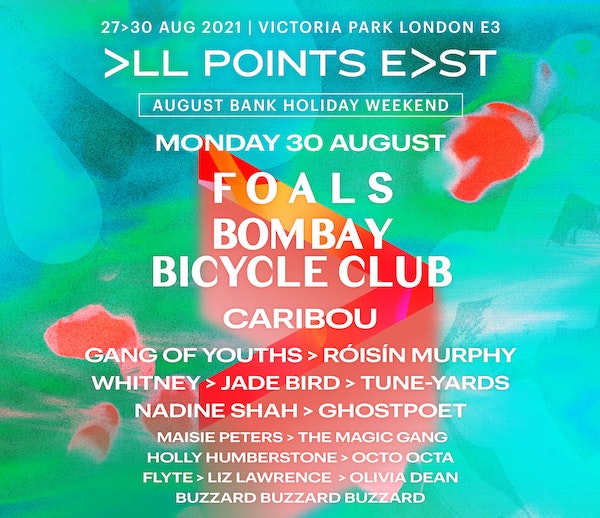 See all dates for All Points East 2021

Alt-rock five-piece from Sydney, Australia, Gang of Youths exploded onto the scene with their raucous rock filled with buzzsaw guitars and David Le'aupepe's yelping vocals, full of autobiographical lyricism. Considering their rock credentials, the band surprisingly all met at an evangelical church. But their only religion is worshipping rock 'n' roll. "I still align myself with Jesus. I'm just not a great poster-boy for it – I’m a fornicating drunkard who swears a lot and listens to a lot of black metal," says David.

Former lead singer of the very successful indie-dance group Moloko, Murphy's solo material breaks away from the traditional Moloko sound to become a bit more electro and funked up, but at the same time, her songs are often chill-out material. With a haunting but beautiful voice, Roisin's unusual vocals carry the trippy sound of her solo material whilst putting her own inimitable style on every single song that she writes and produces.

Whitney are a new band comprising familiar faces - Max Kakacek, guitarist with Smith Westerns, a band once hailed round these parts for their glam influences and 'sloppy precision', and Julien Ehrlich, former drummer with 'lo-fi yet luxuriant psych-soul' crew Unknown Mortal Orchestra.

Jade Bird is fast becoming one of the most exciting new British voices. With her debut release the ‘Something American’ EP and 2018’s follow-up breakthrough single ‘Lottery’, Jade has won the hearts of people across the globe. She has already performed on ‘Later’ with Jools Holland, The Late Show with Stephen Colbert and The Tonight Show Starring Jimmy Fallon and at SXSW she won the Grulke Prize for upcoming talent, following her win of the ANCHOR Prize at the Reeperbahn festival in 2017. Twisting big themes of disillusionment, divorce, cheating, sorrow into the realities of an independent-minded, modern British female, Jade’s music transcends genre with a wealth of influence coming from everywhere, and anywhere. Classic, contemporary, and a total breath of fresh air in the current musical landscape, Jade Bird is that rare, next-generation artist who appears as clued up on the past as she is determined to learn from its lessons: in control, sometimes in your face, and in possession of gifts beyond her years.

A right bag of kooky weirdness. The work of New England's Merrill Garbus, it's all jarring guitars, African yodelling and clanking great drums. It sounds like it should be a horrible mess but her tribal post punk is actually terribly compelling.

British born by way of Norweigan and Pakistani parentage, Nadine Shah is a vocalist/pianist from a small North East town called Whitburn over looking the waves and jagged rocks of the North Sea. Having earned an early reputation for that uniquely rich, soulful voice; Nadine released her debut album Love Your Dum and Mad to critical acclaim in 2013 and her 2017 third album Holiday Destination made the shortlist of the 2018 Mercury Album Prize award.

Ghostpoet (aka Obaro Ejimiwe) is a softly-spoken vocalist with a gentle presence, muddling through the treacle of modern life. He has received widespread recognition from critics and playlists alike and his catalogue of work includes two Mercury nominated albums.

The slacker-rock quartet have spun up a neat formula of chugging Weezer college rock and languid, lilting Mac Demarco guitar lines bound to get you singing along drunkenly into your mates face.

A young singer-songwriter from Brighton. With her tuneful acoustic folk-pop songs and youthful charm, Maisie earned a widespread YouTube following in the mid-2010s. In 2017, when she just 17 years old, her debut single, 'Place We Were Made', became a viral hit, amassing millions of streams. She has met with comparisons to Birdy and Taylor Swift.

Flyte is a young alternative four piece from London. Rooted in classic pop songwriting and propelled by the sound and sensibilities of New Wave, Flyte's songs are infectiously melodic and compellingly lyrical.

Taking inspiration from Damien Rice, Lorde, Bon Iver, Phoebe Bridgers, HAIM and everyone in between, Holly’s style has an honest and conversational tone which immediately steals your attention, fusing the warmth of the acoustic music Holly grew up listening to with a darker, wonky electronic twist.

Ever since Liz Lawrence discovered the guitar she was determined to make acoustic music an exciting, fresh and honest genre. Playing in punk and ska bands as a guitarist in her early teens, she finally managed to take the mic and found herself entranced and engaged in a full blown love affair with live performance. Liz's punk history may not be obvious on first impressions but once she starts to march on the stage her fiery and precocious nature cannot be suppressed. n organic songtress able to grab an unsuspecting crowd in the palm of her hand with only an acoustic guitar as her accomplice.

Born and raised in Walthamstow, Olivia Dean caught the eye of London label AMF after her first ever song ‘Reason to Stay’ which she uploaded to Spotify and Soundcloud quickly gained hundreds of thousands of streams. Dean has been performing since she was 8 year’s old, and her passion for music has taken her from a gospel choir, to busking in the streets, to the acclaimed BRIT school. Every song is a story.