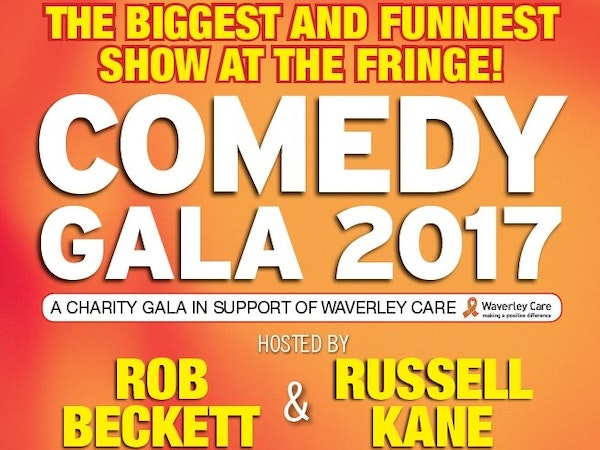 2017 marks a the tenth year of partnership between Off The Kerb Productions and Waverley Care, Scotland’s biggest charity providing care and support to those living with HIV and Hepatitis C. All proceeds raised from the Edinburgh Comedy Gala go straight to supporting the life changing work of the charity. Since it’s launch in 2003, the now annual event has raised almost £450,000, with this year’s event looking set to topple the £500,000 mark, helping to make a positive difference to the lives of people affected by HIV and Hepatitis C in Scotland.

Grant Sugden, Chief Executive of Waverley Care said, “We continue to be immensely grateful to the many comedians who are willing to give of their time to help Waverley Care. Off The Kerb’s continued support of Waverley Care helps us make an enormous difference to the lives of many people across Scotland who are living with HIV or Hepatitis C. And what better way to make that difference than through laughter!”

Showcasing some of the finest comedic talent at this year’s Fringe, this year’s Edinburgh Comedy Gala is set to be the must-see event for all comedy fans at the Edinburgh Festival Fringe.

This popular stand-up and TV comedian is well-known for his appearances on the pop music quiz show Never Mind The Buzzcocks. His career as a performer began in 1984 when he quit his job as a civil servant to follow a new direction as a performance poet on the alternative comedy circuit and supporting bands such as The Style Council and The Housemartins. During the late '80s he worked with Billy Bragg, directing videos for both Bragg and Kirsty MacColl. Phill has an abiding love and in-depth knowledge of popular music, particularly ska, bluebeat and rhythm and blues. His hugely successful standup tours have included Jedi, Steady, Go and Quadrophobia, and he has worked extensively on radio, variously as a contributor, panellist and presenter. He has also toured as part of The Blockheads line-up. Phill Jupitus featured in Ents24's Hardest Working Comedians list in 2018 and 2017.

Andrew’s quintessentially Irish storytelling abilities and cheeky, friendly demeanor make him a natural observational stand up. A regular at the Edinburgh Festival and one of the most in demand acts on the UK & Irish comedy scene. The Cork native immediately gets audiences on-side with a likable, bewildered style described as 'impossible not to warm to' (Chortle). 'Utterly brilliant... going to be a huge star' (Time Out) 'Made his set look easy, left us wanting more' (The Stage) 'Hilarious and accessible with some really powerful thinking underneath' (The Skinny) 'Funnier than Ardal O' Hanlon with an abundance of charm and great stage presence' (City Life).