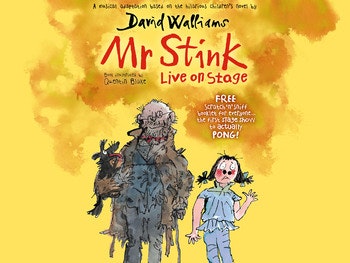 Chloe doesn't like school very much. She isn't as cool as the other kids. Then she meets Mr Stink – the local tramp. Yes, he smells a bit but he's the only person who's ever been nice to her and that includes her mother – an awful snob who wants to be the local MP and is trying to rid the streets of its homeless. About to lose her only friend, Chloe finds Mr Stink a secret hiding place… but is there more to him than meets the nose? David Walliams, that funny tall bloke from Little Britain, has written the smelliest book of all time. This world premiere tour of the scratch 'n' sniff musical production brings Mr Stink pongingly to life.