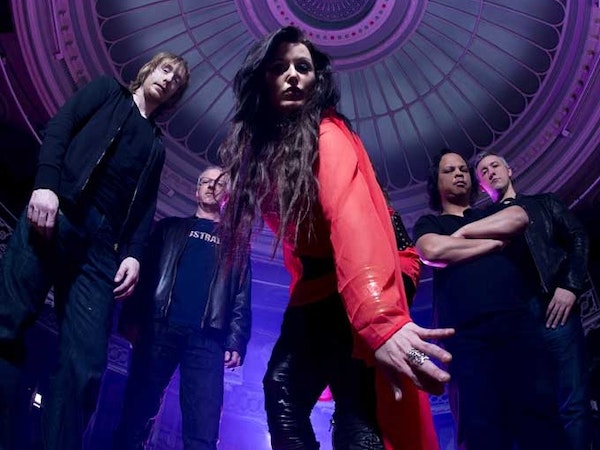 Panic Room bring their breathtaking Live show to Trading Boundaries this summer, for the Final Night of their UK Tour! The Award-Winning band are famed for their spectacular live performances, full of passion and incredible musicianship; and this show promises to be truly magical, with much to celebrate in 2017 -

The release of a ‘brave, beautiful and pioneering’ new album in May ( their 6th ) is accompanied by a major Live Tour, across the UK and Europe. Meanwhile, a spectacular new Live DVD is also now available - filmed in London last October, the DVD was funded by one of the most successful PledgeMusic campaigns of 2016, and recorded by ‘Toward Infinity’, a cutting-edge British film company.

Panic Room create “Music of epic grandeur, sheer power and devastating beauty” (PowerPlay). Famed for blazing their own unique trail, the band have 5 stunning and critically-acclaimed albums to their name. ‘Incarnate’ (2014) hit the Top 10 of the Independent UK Album Charts, which secured their position as leading lights in an exciting new era of British rock.

Fronted by Anne-Marie Helder - twice winner of ‘Best Female Vocalist’ in the Prog Magazine Readers’ Poll - the band hail from Wales, England, and Singapore. With diverse backgrounds and vast, eclectic influences, these 5 musicians have a deep well of creativity to draw from.

Infamously hard to define, Panic Room make a ‘phenomenal fusion of sound, all their own’ (Classic Rock). Full of twists and turns, you will hear blistering rock riffs followed by slick jazzy grooves; a beautiful atmospheric anthem, leading into a hypnotic eastern frenzy... Then an achingly honest heart-song, right next to a joyful jam full of quirky experimentation.

These musicians simply love to play, and in Panic Room they have given themselves free reign - to have fun, without boundaries. In the Live arena, this makes every show a glorious and exuberant experience.

Helder has been dubbed ’the finest frontwoman of her generation, with a soaring voice and mesmerising stage presence; and the whole band are world-class in their musicianship. Among the line-up are: Dave Foster on lead guitar, and Yatim Halimi on bass (both of the Steve Rothery Band). Drummer Gavin Griffiths has played with Fish, Bill Nelson, and countless other legends; while completing the group is keyboard maestro Jonathan Edwards, who is one of the band’s main songwriters alongside Anne-Marie.

2017 is a momentous year for Panic Room - don’t miss this chance to see their very special Final Night of Tour show!

Expect to hear: an explosion of brand new music, alongside the iconic songs and epic anthems which PANIC ROOM are famed for... Expect to see: a truly spectacular live show, performed with passion, excellence, warmth and charisma by this world-class band.

Panic Room is a new band featuring ex-members of Karnataka, Mostly Autumn and Fish's band. While the music has progressive elements it will also appeal to a much broader audience with its melodic and powerful songwriting. Rock, folk and world music influences combine in a vibrant mix to produce a unique and very individual sound. Led by the soaring voice and magnetic stage-presence of frontwoman Anne-Marie Helder, expect music of epic grandeur, spine-tingling beauty and gutsy raw power, all delivered with the sheer passion and sense of genuine fun which has made Panic Room one of the best-loved live bands on the live music circuit today.