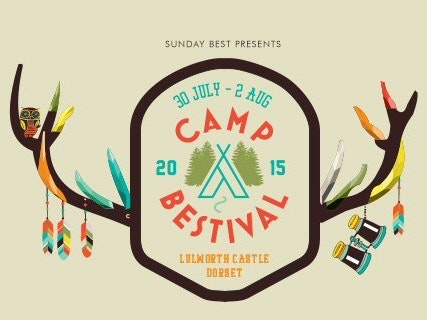 The family friendly Camp Bestival, which offers a wealth of entertainment alongside the music, returns to Lulworth Castle in 2015.

Inspired by our love of getting out into the open air and running free, Team CB have announced a brilliant new theme that’s very close to their hearts. That’s right, they’re putting Mother Nature front and centre for 2015, as Camp Bestival Goes Wild!

Camp Bestival’s own wild man Rob da Bank says: “Calling all wild boys and wild girls…oh yes my wild friends and family, prepare to get down and dirty at Camp Bestival 2015 as we dump the technology and scramble into the woods for a back to nature escape from normality. We’ll have golden chances to bond with your kids in the mud kitchen, sleep under the stars with your mates and family, and take part in tons of wild activities. Release your inner wild thing and see you in July!”

With something for everyone, it’s the ultimate family festival with musical treats and one of the best DJ line-ups anywhere in the world.

Expect the best music, arts, entertainment and everything in between, with hundreds of free things for kids to do including, new for 2015, The Chrysalis Garden, The Train Trip and Wild Adventures: the biggest, best and wildest activities yet.

Plus back by overwhelmingly popular demand, they're pleased to announce the return of The Den! A whole area of Camp Bestival dedicated solely to 13 – 17 year-olds, it’s kind of a festival within a festival, with new and emerging talent, workshops, talks, Q&As, and loads of stuff the olds won’t understand. From an exclusive, teen-only, interview with rap don Professor Green, and an appearance by BBC Radio 1’s Dr Radha, to free-running madness and all-out dancing, it’s a teen dream.

As part of Camp Bestival’s passion to get everyone connected with Mother Nature and the wonders of the great outdoors, we’re delighted to announce that the National Trust will be back in 2015 with their 50 things meadow at Lulworth Castle, giving kids a brilliant taster of their amazing ‘50 things to do before you’re 11¾’ initiative.

The Guardian Literary Institute features a program as diverse and entertaining as ever. With appearances from Bill Oddie, Suzanne Moore, Sara Cox, Kate Tempest, John Harris, and many, many others, they'll have a cornucopia of fascinating, intriguing and downright brilliant ‘How To…’ sessions, talks, spoken word, quizzes and the perennially popular bedtime stories, all helping to keep those neurons firing among the festi-holiday frolics.

The Greatest Tent On Earth

The King Of Tiny Things

A classico-electronical collective. The core members Jack Patterson (bass, keyboards), Grace Chatto (cello) and Milan Neil Amin-Smith (violin) met while studying as undergraduates in Cambridge, later joined by brother Luke Patterson (drums). Their unique take on dance music sees beats collide with classical, where Baroque meets house and pop. Classing themselves as an 'electroquartet', and featuring a string of guest vocalists, they have been described as the new Disclosure with a chamberpop bent.

Dub Pistols have done everything it's possible to do in a band and still want more. Fronted by infamous Londoner, Barry Ashworth, they have toured the world more times than most of us have changed channels, they have spent years breaking America down into tiny, eager pieces via extended jaunts with punk-rock roadshows, whilst remixing the likes of Moby, Korn, Limp Bizkit and a host of others along the way. Simply one of the best live bands in the UK.

Often noted as being 'Britain's best kept secret DJ', Ralph Lawson has been a regular at Fabric, Bugged Out and Home for the best part of a decade. Not satisfied with making his own music and releasing the music of new artists on his label 2020 Vision, Ralph has earned himself a significant reputation as a re-mixer, famously tampering with the work of artists as diverse as David Bowie and Felix Da Housecat.

Now an elder statesman of the DJ scene, Slipmatt has traversed the birth of rave (as part of SL2), jungle and drum'n'bass with consummate ease.

Hidden away in the North East of England, DJ Chris Tarn and double bass player Phil Smith discovered they shared a fondness for sampling long forgotten or never discovered dusty vinyl and decided to hook up and bounce around a few ideas. These ideas took a life of their own as they started to work with live musicians and the sound of the band took on more of a live feel. The songs were passed around friends and ended up getting radio plays on Craig Charles’ Funk and Soul Show (BBC 6 Music) and Pete Isaac's Jelly Jazz Show and were played extensively on local radio stations up in the North East.

Phil Nichol is a truly unique performer. An acclaimed actor, award winning comedian, producer, presenter, writer and musician, there is no end to his talent! His skill as an improviser whether it be musical, comedy or straight is unparalleled. WINNER - Scotsman Fringe First Award 2011 WINNER - IF.COM Eddie Award 2006 (previously The Perrier, now known as the Edinburgh Comedy Award) WINNER - Time Out Best Comedy Performer 1998 Chortle Best Headliner - Nominee - 2002, 2006 & 2010 As seen on The Graham Norton Show, Never Mind The Buzzcocks, Altitude Festival , Annually Retentive, The World Stands Up, Comedy Shuffle, and many more. 'Nichol is absolutely born to perform, and the show is brilliant' (The Skinny) 'Attacks his material with all the restraint of a Tasmanian Devil in a foghorn factory' (The Times) 'Phil Nichol is an extraordinary performer – entrancing and alarming in equal measure' (The Stage) 'Very polished, witty and insightful. It is also extremely funny' (List) 'Seismically powerful award-winning comic force' (The Scotsman).

EastEnd Cabaret is the irrepressible, award-winnning musical comedy duo Bernadette Byrne (deviant diva) and Victor Victoria (freakish multi-instrumentalist). This debauched duo have rapidly stormed to the forefront of London’s cabaret scene, captivating and titillating audiences with hilarious original songs, quick-witted improvisation and tales of the playfully perverse, played on instruments from the accordion to the musical saw. 'A high-powered feminine Flight of the Conchords, dipped in acid and drenched in smut' (Crikey) Comic genius' (Three Weeks) 'Queens of musical smut' (Time Out).

Highly-acclaimed Geordie stand-up comedian with numerous TV and radio credits to his name. An expert in the delivery of in-yer-face comedy, Dave's high-energy routine has left audiences around the globe gasping for breath and crying with laughter. In 1989 Johns’ launched the Comedy Café on Westgate Road and invited the emerging Jack Dee and Jo Brand to appear, but realising they needed an MC stepped-up and did it himself. Finding he was rather good at it and pricing tickets at £3.75 including soup and a bun, the club became a city hot spot and Dave went on to host many more comedy stars including Eddie Izzard, Steve Coogan, Harry Hill and nervous 14 year old lad called Ross Noble who went on to do rather well for himself. Johns became a successful comedian, touring throughout the UK, a regular with the Comedy Store Players and appearing on much loved TV shows like Never Mind the Buzzcocks and 8 Out of Ten Cats. 'He performs comedy's greatest magic, simply by being himself. A genuinely funny, engaging performer' (Glasgow Herald) 'He shifts from the sublime, to genius, to uproar in the blink of an eye - an extremely entertaining hour' (The Guardian).

Ex-member of The Goodies and now better known as a bird watcher. He is a regular Television broadcaster, sharing his knowledge of the wild with endless enthusiasm.

Steve is an author, expedition leader, naturalist, wildlife expert - and the fearless presenter of the Children's BBC series Deadly 60, Live and Deadly, Deadly 360 and Deadly Art. Steve travels the world to learn about the most inspiring predators, from boxing mantis shrimp to charging tigers.

Metta Theatre Company creates visual, imaginative and playful theatre, which includes the audience in the act of storytelling. Founded in 2005 by director Poppy Burton-Morgan and designer William Reynolds, Metta Theatre has worked with venues across London, including the Soho Theatre, Southbank Centre, the Victoria and Albert Museum and the Royal Opera House's Linbury Theatre. The Company appears mostly in theatres but has also performed in cafes, museums and playgrounds in London and across the UK.

Rajasthan – the land of royalty – a glittering jewel set in the golden sands of the barren Thar Desert, with a wealth of rich culture, tradition and heritage. The Rajasthan Heritage Brass Band is a living embodiment of this landscape, a spectacular celebration of its vibrant and colourful lifestyle, their music and dance a heady, exciting and hypnotic reflection of this enchanting region. With a diverse repertoire spanning Rajasthani folk songs, Bollywood hits, spiritual qawwali and Bhangra beats these ten vividly costumed artists cover the full spectrum of the evocative and joyous music that governs life in Rajasthan.