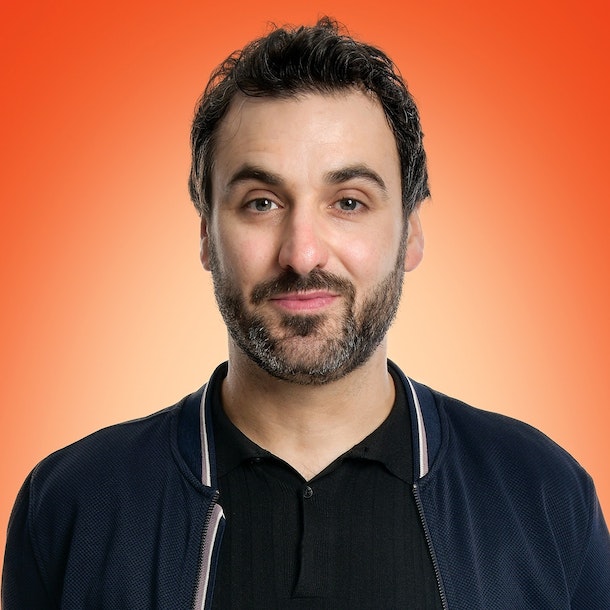 at Bar One, Derby
Passed

Pay once and stay for as many shows as you like.

Winner of ITV's Show Me The Funny, this half-Iranian, half-Middlesbrough comic is a rising star on the comedy circuit. Full of an insatiable lust for life, his exuberant comedy greets the audience like a sex-starved spaniel would greet a trouser leg. In 2012 he took part in Let’s Dance for Sports Relief on BBC, won Best Newcomer at the Loaded LAFTA Awards and Forth Radio Best Stand-Up People’s Choice Award for his hit show ‘Hug Me I Feel Good’. He played the role of the dastardly Captain Hook in ‘The Pantomime Adventures of Peter Pan’ at the Worthing Pavilion from December 2016 to early Jan 2017. A natural-born performer, he exudes charisma from the stage (and often off it, when he scuttles into the crowd...!) 'High energy and conviction, his material is great; he's going to go far' (The Sunday Times) 'Omid Djalili meets Dave Allen' (Daily Mail) 'Monahan possesses the rare ability to be hilarious without being outrageous' (Three Weeks) 'The same mix of control and on-stage charisma as a young Alan Davies' (The Herald) 'Monahan is a supremely engaging performer, adored by his audiences and capable of some terrific comedy' (The Scotsman). Patrick Monahan featured in Ents24's top hardest-working comedians list in 2018, 2017 and 2016.

Steve Bugeja is one of comedy’s most exciting rising stars. Since winning the BBC New Comedy Award in 2013, Steve has gone on to host the BBC Radio 4 series Economics with Subtitles, and has made numerous appearances on TV shows such as Love Island: Aftersun (ITV2), Russell Howard’s Stand Up Central (Comedy Central) and Dog Ate My Homework (CBBC). Making a name for himself internationally, he has been invited to perform at the Melbourne International Comedy Festival for the past two years, appearing on the Opening Night Comedy Allstars Supershow (ABC1) and on Comedy Up Late (ABC1). Steve wrote and performed his own sketch 10 Things You Should Know as an Adult for BBC3, acted in 4Music’s sketch show Pop Sludge and starred in a viral comedy video for Lucozade alongside England footballer Harry Kane. A prolific writer, Steve was a key member of the writing team for The Russell Howard Hour (Sky1), and has contributed material to Mock the Week (BBC2), 8 Out of 10 Cats (Channel 4) CelebAbility (ITV2), Russell Howard’s Good News (BBC2), The Now Show (BBC Radio 4) and The News Quiz (BBC Radio 4). In 2012, he and his writing partner won both the BBC’s Funny on Three sitcom competition, and BBC’S Jesting About 2 sketch competition. In 2018, Steve embarks on his fourth and largest national tour with Almost, following the success of a critically-acclaimed, sell-out run at the Edinburgh Fringe. The tour includes a 6-night run at London’s Soho Theatre. This tour follows his previous critically-acclaimed shows Summer Camp (2017), Unpronounceable (2016) and Day Release (2015). Unpronounceable and Summer Camp went on to tour nationwide, selling out increasingly large venues year on year. ‘Bugeja has an eye for original comic detail that's all his own.’ - The Guardian ‘Drum-tight, as if polished by a sitcom writers’ room to cram as many jokes in as humanly possible’ - Chortle ‘Steve is a charming, likeable stand-up with a set packed with gags’ – Sunday Post ‘Blends the intelligence of a well-crafted hour with some touching emotional honesty’ - The Scotsman

Card throwing ninja who has spent the last 4 years working as a professional award winning comedian in New Zealand and Australia. Javier Jarquin moved to the UK in 2010 where he has established himself as a circuit regular and headline act around the country and in mainland Europe. He has performed on the same bill with the likes of Jimmy Carr, Stewart Lee, Jo Brand and Paul Daniels. 'High calibre throughout' (The Morning Star) 'Brilliantly entertaining performance' (The Edinburgh Reporter) 'Kept the audience laughing throughout@ (The Edinburgh Spotlight) 'Seriously talented when it comes to wowing a crowd' (The Stage).

Comedian, presenter and writer Steve N Allen has a natural stage presence that connects with a crowd. From relatable anecdotes to topical commentary, Steve uses his material to build rapport with the audience, so understandably Steve gets much work as a compere or opening act, leaving the room with a warm energy. Regular presenter for BBC Radio Kent and TimeFM Essex. Currently stars in BBC2's satirical comedy show The Mash Report as "Tom" on the news desk. '... humorous and chatty' (Funhouse Comedy Club).