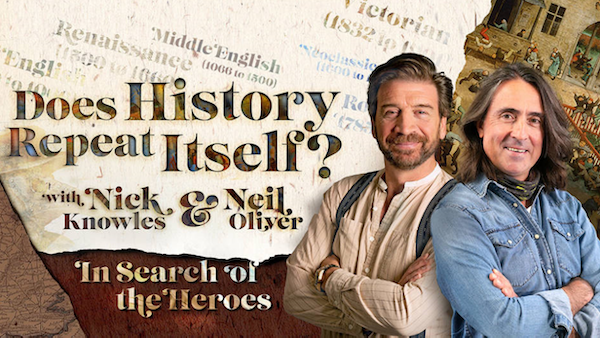 Nick Knowles & Neil Oliver - Does History Repeat Itself? In Search of the Heroes...

See all dates for Nick Knowles & Neil Oliver - Does History Repeat Itself? In Search of the Heroes...

For the first time, two of the most recognisable faces of British broadcasting will try and answer one of the most emotive and topical questions of our time, ‘Who are the British and how did we get to where we are now’?

What has gone before, keeps happening again, and the real price is always paid, in blood, sweat and tears, by the same people. It is overlooked and forgotten souls, who have always done the heavy lifting and bear the burden of history.

This country was heaved into place by serfs and slaves, villeins and labourers. The ships that carried trade and transported the fighting men … the swords and longbows they wielded in battle … the ploughshares the farmers walked behind, the trees that were felled to build battleships and homes great and small … the stones shaped for cathedrals and the scaffolding that raised them up … every ounce of the coal that heated the furnaces … every ounce of metal mined from beneath our feet … all of it was the product of the effort and toil, the skill and endeavour of the common men and women of our past, bonded by common purpose.

This is a fanfare for the common man and woman – because the shoulders we stand upon today, are theirs. The nameless, unheralded, and un-mourned. Ignored until now.

It is time to meet the common folk as Nick and Neil turn the spotlight on those who gave their all for the Britain, we know today.

Nick Knowles is a presenter best known for his time presenting BBC's DIY SOS and Who Dares Wins.

Neil Oliver is an archaeologist, historian, author and broadcaster. Neil has travelled and explored every corner of Great Britain, most famously through hosting eight series of the BBC Two programme Coasts. Neil made his television debut in 2002 with BBC Two’s Two Men In A Trench, which featured him visiting historic British battlefields and recreating the battle situation using state-of-the-art archaeological techniques. He went on to become the presenter of further BBC Two shows, notably Coast, The History Detectives, Scotland’s History: The Top Ten, A History of Ancient Britain, A History of Celtic Britain and Vikings. He hosted Channel 4's The Face Of Britain and appeared the channel's Time Team Big Royal Dig. Neil has also contributed to BBC One's The One Show and Cleopatra.