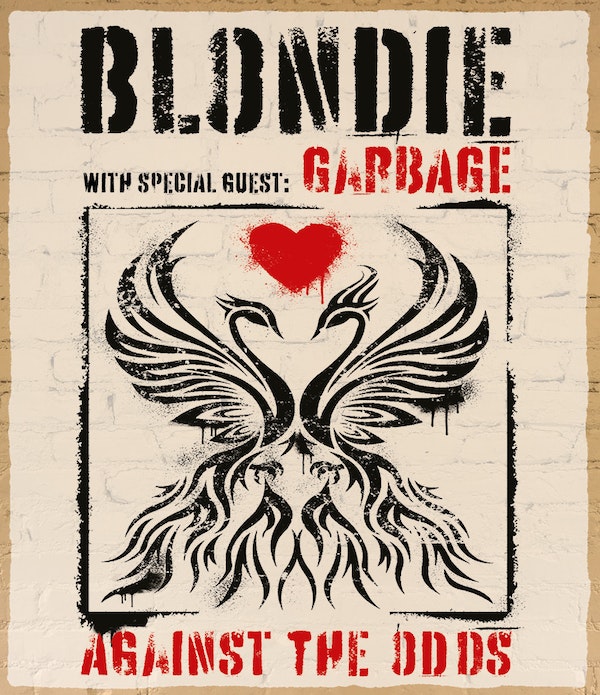 Against The Odds Tour

Blondie, one of the most influential bands to emerge from New York’s punk scene, have announced a 10 date UK tour for November 2021, their first UK tour in 4 years.

Joining Blondie for this run and making this a double female-fronted band tour, is Garbage, led by quintessential rocker Shirley Manson, who was invited to induct Blondie into the Rock and Roll Hall of Fame in 2006. Garbage have themselves sold more than 17 million albums and many of their own singles are now considered alt-rock classics.

The two bands have toured together before on their highly successful and critically acclaimed “Rage and Rapture” tour of North America in 2017.

Undeniably one of the most trailblazing and influential bands of our time, Blondie is pioneering frontwoman/songwriter Debbie Harry, guitarist/conceptual mastermind Chris Stein and powerhouse drummer Clem Burke, along with now long standing band mates bassist Leigh Foxx, guitarist Tommy Kessler and keyboardist Matt Katz-Bohen. For the last four decades, Blondie has become and still remains a true global icon; one whose influence both shaped and continues to inform the worlds of music, fashion and art. From an irreverent Lower East Side punk outfit to bona fide international ambassadors of New York cool, Blondie will forever be synonymous with that punk spirit that lives somewhere in all of us. Their chart- topping success, fearless spirit and rare longevity led to an induction into the Rock ‘N’ Roll Hall of Fame in 2006 and more than 40 million albums sold worldwide to date.

After a rather lengthy hiatus to pursue acting roles and other musical projects, Shirley Manson and the boys returned in 2012 with their first live shows since 2005's 'Bleed Like Me'. Their irresistible blend of gothic indie-rock with subtle dance undertones saw the band achieve a string of Top 40 singles in both the UK and US in the '90s and early '00s, including 'Only Happy When It Rains', 'Stupid Girl', 'Push It', 'I Think I'm Paranoid', 'Why Do You Love Me' and the Bond theme 'The World Is Not Enough'. They released their 6th studio album 'Strange Little Birds' in 2016, reaching no.1 on the US Billboard Independent, Alternative and Rock album charts.