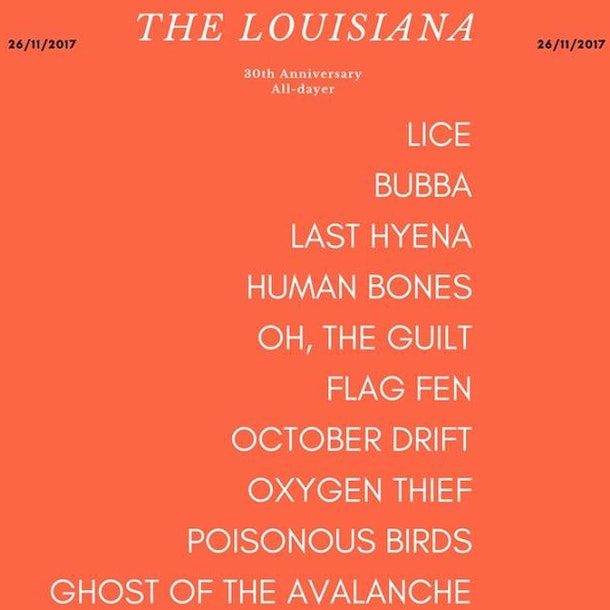 Formed in Bristol in 2016, Lice first rose to attention with shows alongside bands like The Fall, Shame and Fat White Family, debuting a wiry, difficult brand of art-punk

Oh, The Guilt are a post punk 3 piece from Bristol, UK.

Formed at the start of 2014, October Drift may be a little known and mysterious project at the moment, but they wear their heart on their musical sleeves. They’ve been digesting a stock of Smashing Pumpkins, The National and My Bloody Valentine records, constantly rehearsing and playing under the radar shows – which have gained them a word of mouth popularity. Continuing to shun social media, appearing clandestine behind ambiguous placards with mysterious balaclava-clad characters appearing through the cities they play, the band continue to communicate with their fans purely one-on-one.

Ghost Of The Avalanche

Ghost Of The Avalanche are a two-piece, noise-punk band from the south-west of the UK. Whilst drawing comparisons to bands such as Death From Above 1979 and The Bronx, the band themselves insist their influences lie in 80s and 90s hardcore punk (The Misfits, Rancid, The Ramones) and 50s pop (Fats Domino, Elvis Presley and Roy Orbison). It's this bizarre blend of sweet and sour that makes Ghost Of The Avalanche unique in their sound.