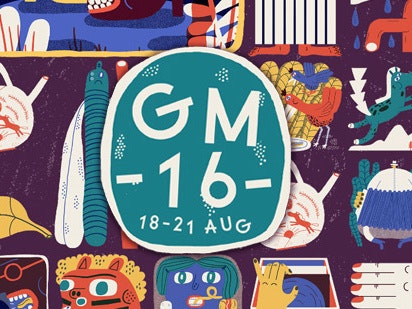 Green Man is a music festival set in the heart of the beautiful Brecon Beacons in Wales. The river Usk flows around the perimeter and the Black Mountains stand impressively as the backdrop to the 'Mountain Stage'.

Whilst the festival is 100% independent, it still draws what we think is a brilliant line up of performers each year, spanning the music spectrum- including indie, psychedelia, Americana, electronica and folk, as well as DJs playing everything from dub-reggae to electro and stoner rock.

There's also Comedy, Cinema, literature, Einstein's Garden, Nature and Nurture and many, many more magical surprises to make sure you have the most magical weekend of your year.

Four piece pop group, Wild Beasts are a mix of many different styles with songs that sound as different from each other as possible, with some almost operatic style vocals. They dare to be different, not wanting to be pigeon holed or conform to any norms, which is reflected in their unusual choice of musical arrangements, vocal styles and lyrics.

Alex Horne has gathered some of the UK's finest jazz musicians and mixed them with the most exciting comics in the country to create some unique and hilarious noises. It's jazz-infused comedy; live and loud – part improvised, part honed, part performance, part party. 'We can't recommend The Horne Section highly enough – it's simply the best late-night show at the (Edinburgh Fringe Festival) and a gigantic heap of fun' (Time Out) 'An absolute blast' (Metro)

Pete Brown was the first poet to read at Morden Tower on Bloomsday 1964, in Newcastle upon Tyne. He performed Kurt Schwitters’ poetry at Wholly Communion at the Royal Albert Hall in 1965. He met Ginger Baker and Jack Bruce at the Marquee Club in 1966, and wrote lyrics to Wrapping Paper.