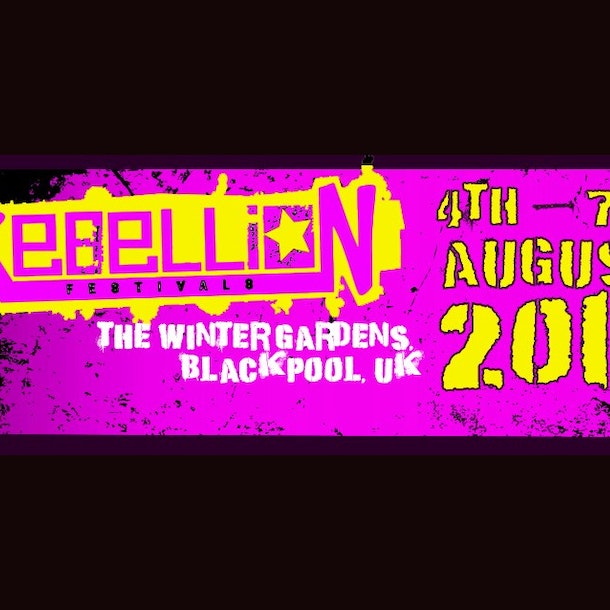 Rebellion Festival is the largest independent punk / alternative music festival in the world. Over four days every August in Blackpool, the very best in punk gather for the social event of the year!

The Descendents are a punk-rock band from California who formed in 1977. Some of their members have also played in Black Flag and ALL. They became major players in the hardcore punk scene in L.A. and their influence has been huge for bands such as Blink 182, NOFX, Green Day and The Offspring, to name just a few. Their album artwork is distinctive for the caricature drawn of the band's singer Milo who has appeared on five of the band's seven albums.

Riot-starting, bouncer-bashing, cop-baiting, hotel-trashing, foul-talking, noise-making, chaos-causing, venue-wrecking, government-hating, rule-breaking, unrelenting, punk rocking... Let's get one thing straight: The Exploited are not 'punkers' or any of the other cutesy, watered down, MTV-friendly names you might want to call them - The Exploited are punk rock.

The Glitter Band were the musicians who backed Gary Glitter on his hit records under the direction of the late great Mike Leander and then went on to have a string of international Top 10 hits in their own right, including Angel Face, Goodbye My Love and Let's Get Together Again. After many years living under the cloud of Gary Glitter's spectacular fall from grace, The Glitter Band are striking out and taking back the songs they performed on and that were the soundtrack to an entire generation.

Archetypal Punk band. Fast, furious and full of speed, coinciding with Punk, the Sex Pistols and arguably predating it.

Buzzcocks are an English punk rock band, formed in Bolton in 1976, they are regarded as an important influence on the Manchester music scene, the independent record label movement, punk rock, power pop, and pop punk. Their lead singer Pete Shelley passed away in December 2018 but the band decided to carry on as a trio.

Instrumental in kick-starting the original punk rock scene, The Damned have never been afraid to push themselves musically and throughout their years together have cruised through whatever areas of progressive, psychedelic, goth and pop rock that take their fancy. Smash it up with the original gothic punks - back with original members Dave Vanian and Captain Sensible.

The pUKEs are a punk ukulele group based in London who play songs by the likes of Dead Kennedys, Exploited, Xray Spex, The Clash, etc like you never heard ‘em before – as well as original tunes. The band formed in 2011 after meeting in an east London pub to sink a few pints and play punk songs on ukuleles. The pastime soon turned into demand and their massive stage presence and raucous live show has landed them numerous festival appearances and gigs across the UK, raising a glass and a smile wherever they go.

Cult comedy songsters. In recent years they have featured on Channel 4’s shoddy internet clip show Rudetube, had their YouTube channel removed after featuring a video of the Royal Family pleasuring themselves, performed to a sell-out run at the 2010 Edinburgh Fringe Festival and received death threats from mental Michael Jackson fans over their YouTube tribute. “Life-affirmingly puerile.” – Charlie Brooker (Guardian).

The front man from the Dead Kennedys and Alternative Tentacles who is as well known for his outspoken political views as he is for the great music he produces. After several years performing spoken word material, Biafra returns with a new band - Jello Biafra And The Guantanamo School Of Medicine. Fans will be pleased to know he's not mellowed with age and is still delivering anarchic political punk anthems. Even 'Holiday In Cambodia' still makes it into the set list!

Sax-riddled dada punk combo, The Cravats, emerged from Redditch New Town in the Midlands, England in 1977. They were early favourites of the late great BBC DJ John Peel (they recorded four sessions) and released music for beloved UK indie labels like Small Wonder and Crass Records. They sound as eccentric, adrenalised and inventive as ever. Nobody sounds quite like The Cravats.

Glasgow's only true-to-the-energy of the man in black; Johnny Cash.

The Men They Couldn't Hang

Acoustic pop of the highest quality from the pen of Phil Odgers. Selling out venues across the land with their firebrand mix of punk passion, rousing guitars and folk roots.

A five piece punk band from Crawley who formed in early 2008 with their influences being deeply rooted in Punk and Oi! with a smattering of Rock 'n' Roll.

The front man from the Dead Kennedys and Alternative Tentacles who is as well known for his outspoken political views as he is for the great music he produces. After several years performing spoken word material, Biafra returns with a new band - Jello Biafra And The Guantanamo School Of Medicine. Fans will be pleased to know he's not mellowed with age and is still delivering anarchic political punk anthems. Even 'Holiday In Cambodia' still makes it into the set list!