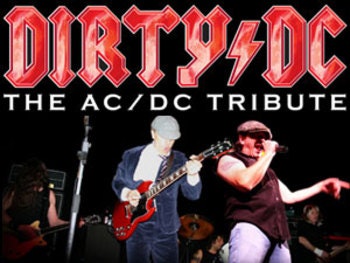 at The Factory, Barnstaple
View Tickets
£16.50

This show was rescheduled from 20th March 2021.

Dirty/DC have been playing throughout the UK and Europe since 1988 and have developed a lineup and stage show that has made their reputation seriously strong amongst AC/DC fans, whether die hard fanatics or people who just want a good night out. Every visual detail has been fine tuned from the wall of Marshalls to Angus's footwear, but most importantly the music delivery and stage show has an impact regularly described as 'Awesome'!. Dirty/DC give real value for money with a full 2 hour+ show with all the AC/DC favourites from both Bon and Brian eras. So, if you love AC/DC and really want to rock - Rock up to a Dirty/DC show soon!

GnRe are the most successful and most in demand GUNS N ROSES tribute band in the world with sell out shows all over the planet. The ONLY GnR tribute to be PERSONALLY asked by 3 different members of the 1980's - 90's Guns N Roses lineup to join them on stage. GNRE have the only singer able to deliver the exact same unique vocal style and stage show synonymous with classic Axl Rose, including being the only GnR tribute band frontman able to deliver November Rain on Piano. A lead guitarist to pull off the Slash tone, look and attitude, many have tried but simply fall short. With a true Guns N Roses sound and stage show, GNRE meticulously recreate every visual detail and every musical note to capture that reckless spirit of the original Guns N Roses legendary live performances. Simply put, Gn'Re are the ONLY truly authentic Guns N Roses experience. Venue owners, Promoters and fans agree. Nobody does it better.