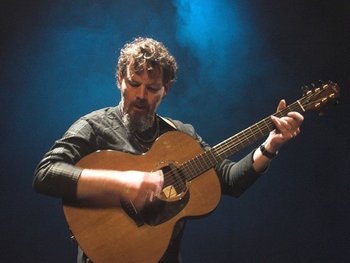 Keith James has performed at the Arts Centre twice already, in his tribute shows to Leonard Cohen and Nick Drake.

He writes, This It is hardly surprising that, to mark its 50th anniversary, Yusuf has entirely re-recorded and re-released his remarkable Album Tea for the Tillerman, with each of the unforgettable 11 songs re-conceptualized and re-imagined and gifted back to us among all the uncertainties of 2020 and beyond. (Release September 2020)
During the early 1970s, the amassed body of music from this hugely popular and sincerely loved singer/songwriter made for a collection of 'must have' records across a whole generation.

Tea for the Tillerman and Teaser and the Firecat were on everyone's turntables and on every radio station, live versions are played in concerts, bars and on the world's beaches to this day. Songs such as Wild World, Father and Son, Moonshadow and Where do the Children play have been covered by hundreds of Artists worldwide.

Keith James is a long standing, well-respected and inventive concert performer who specialises in playing intimate, carefully researched biographic style concerts of those he has studied and revered as writers over the years.

He weaves the story of Cat Stevens? life from his early pop career, life threatening illness and spiritual journey around a performance of his beautifully-crafted and memorable songs.

This concert will give you far more than just the music itself...

There is a huge amount of insight into the history and the spirit of Cat Stevens; his early pop career, his illness that changed him existentially and spiritually into an incredibly thoughtful and loving singer songwriter; such that his songs are remembered instantly for their uplifting sense of vision, truth and human fragility.

Singer/songwriter from Kent who specialises in the varied and often complicated songbooks of Nick Drake, Cat Stevens and Leonard Cohen. 'Keith James has become a pillar of trust. A sublimely intimate and engaging voice' (The Sunday Times) '... certainly the UK's most celebrated and evocative interpreter of golden music’ (The Guardian).